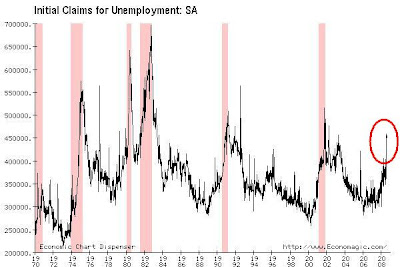 In my opinion jobs are the most crucial element for the future direction of the economy, dependent as it is on consumer spending. There is an interesting aspect here: most previous slowdowns were caused by excess inventory build-ups, with unemployment claims rising fast as manufacturers cut back on production. This is no longer the case because:

a) Manufacturing is no longer the driver of the economy, having previously shed millions of jobs in the 2000-04 period and,
b) The slowdown is not caused by excess inventory but by excess debt.

Job losses are now happening increasingly in services, particularly the FIRE sector where - unlike plant closures - mass layoffs simply do not exist. Rather, job losses come in dribs and drabs; also, some people may still be listed as employed but making very little - if any - money. For example, realtors and mortgage brokers who rely entirely on commission.

The bottom line is that unemployment benefit data is slower in building than previous recessions and will likely persist for longer than usual.
Posted by Hellasious at Friday, August 15, 2008 60 comments:

The Monster Employment Index edged down again in July. It is now at the lowest level in 29 months.