Goodbye To All That

The United States Senate just failed to pass climate-change legislation.  Thus, unless our "leaders" perform an immediate about-face, the oil and coal interests can sleep soundly at night - as long as they keep their air-conditioners blasting away at full power, of course.
Here are two links from people who are much better at venting frustration than I am:

All I have to say is that the downfall of empires is obvious not only to historians armed with hindsight, but also to contemporaries possessing a minimum of common sense.  (I bet there was not a single Roman above plebeian level who would deny that Caligula or Nero were horrible choices.)
And thus, today's title:  Goodbye To All That was Robert Graves' first novel - the same author who went on to write I Claudius and Claudius The God.


So, dear Senators (what a coincidence that you ladies and gentlemen have the same title as those Roman fools) you just made it a lot easier for the US to go off the cliff.  How do you feel, strapped on to your senatorial chariot (or is it a tricycle?).

Do you know how Athens got to be a major "global" power during its Golden Age of Pericles? (Actually, it hardly qualifies as an "Age" since it only lasted roughly  from 450 to 430 BC, a reminder of the ephemeral nature of power.)

Was it the rise of democracy, their large and powerful navy, repeated victories against the Persian Empire, civic pride in their cultural excellence,  the creation of colonies and trade all over the Mediterranean and Black Seas... ?  Or, was it that they simply discovered lots of silver right next door to the city of Athens in 483 BC?

The Laurium silver mines were the property of the Athenian state and were worked exclusively by slaves.  The precious metal was minted into coins which were widely circulated and used in trade all over the world.  More than a mere medium of exchange, the Athenian Owl became history's first global reserve currency.

Yes, we can thank (or curse)  the Greeks for that, too.

I'm not sure if the Athenians were then first to debase their currency as well, but by Roman and Byzantine times debasement was a common way to deal with economic problems and to cover state revenue shortfalls through increased seingiorage.  Of course, this created even bigger problems, since currency debasement was (and still is) the surest and quickest way to impoverish the population through the decline of their purchasing power.

However, one advantage of specie money (precious metal coins) was that, unlike today's fiat currency, its elevation to reserve status did not require an a priori religious belief in its soundness (see picture below).

Guess Why The Lord's Name Is Invoked Here?

Another, was that its debasement was immediately apparent to everyone. For example, when the Roman denarius got smaller and/or lighter in silver content even the lowest plebeian knew he was getting screwed -  and who was to be blamed, for that matter, since his face was on the coin itself (*).  That's pretty democratic, in a practical, let's-grumble-on-the-way-to-the-forum fashion.

Anyhow, it's been a long time since precious metal coins were used in  everyday transactions, and it's even been one hundred years since the gold standard started unraveling.

What replaced it was paper and then electronic fiat money;  today we even have "shadow" money, a creation of the shadow banking system.  Fiat money was a concept as modern as quantum physics;  interestingly, both appeared around the same time, in the first part of the 20th century.  Modern money shares a common foundation with quantum physics because, just like quantum states, our money leads an indeterminate probabilistic existence until we interact with it, i.e. until we try to use it for a concrete purpose.

For example, what is the "value" of a dollar? We measure it by comparison to a "known" quantity, like a bar of chocolate.  Today, a dollar may buy one bar but tomorrow  it may be worth only nine-tenths, or eleven-tenths. The astonishing conclusions from Schrodinger's cat point to more directions than the probabilistic nature of photons only.

Alright, now for those "simple" rules for a global reserve currency.

First, we must keep in mind that our money is, in fact, a quantum currency, i.e. its value is not fixed but relative, highly dependent on what people think it is worth.  In quantum physics the equivalent - and much more general - principle is that reality is created through our observation and is therefore not independent of us.

However, people also want their money to be  "stable", just like they prefer to perceive reality in terms of comfortably deterministic Newtonian physics, not as probability wave functions or multiverses. Squaring the two is not an easy task, very likely because as humans we have not yet evolved far enough  to routinely function in a quantum existence.

We conclude, therefore, that a global reserve fiat currency must  continuously and dynamically balance between its inherent quantum uncertainty and the human desire for determinism. To occupy, if you like, the space between quantum and Newtonian monetary mechanics.

Therefore, these are the two rules for today's reserve currencies:
The only way to reduce uncertainty is to possess as much clear and unambiguous information as possible.  That won't make a quantum currency behave 100% deterministically (that's impossible), but it will reduce risk.

For example, if the Fed is vague about what it is doing to its balance sheet, dollar investors  will calculate a higher probability of debasement.  Likewise,  when the government drops regulation of important financial markets, or allows them to grow unchecked over the counter, or  when finance becomes dominated by a few large, secretive players.
Alan Greenspan as Fed Chairman subscribed to the exact opposite idea as he befuddled everyone with his tortured syntax, i.e. he essentially maintained that what you don't know can't hurt you.  His cavalier attitude towards the public's ability to understand monetary matters (a gross misreading of Ayn Rand) must share the blame for the creation of the Debt Bubble.  By contrast, the ECB at least tries to be more open about its operations.

Since the only way to define a currency's value (i.e. to provide more information about it) is by comparison to a known quantity, we urgently need to adopt a "yardstick".  In the past we used the gold standard, but for many reasons this is no longer a useful benchmark.  I propose that today's money supply growth be fixed relative to the rate of growth of renewable energy, thus killing two birds with one stone: money will have a known, useful benchmark and the economy will be forced to function in ways that will quickly address resource and environmental concerns.

You can read more about it in an older post: The Greenback - Toward A New Monetary Policy.

Does the dollar, today's global reserve currency, follow these two simple rules?  Sadly, it does not.

(*) In contrast to decrepit Roman emperors, today's fiat money issuers are a lot wiser  about who is depicted on their money.  They  prefer such anodynes as long-dead presidents or, even more neutrally, doors and bridges in the case of the euro.
Posted by Hellasious at Sunday, July 11, 2010 19 comments: 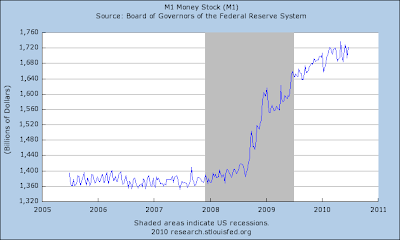 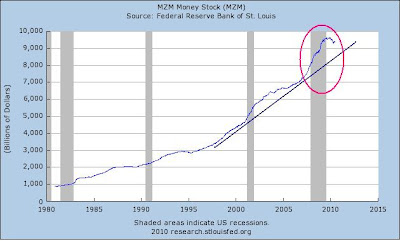 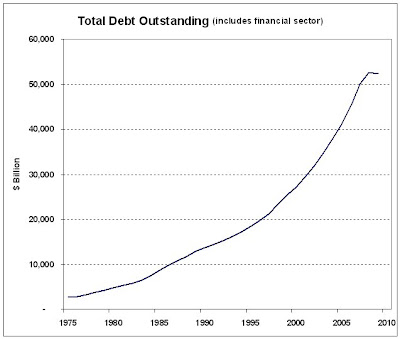 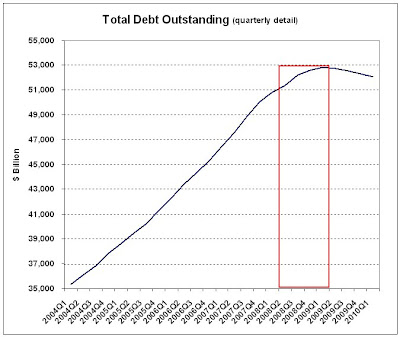 Definitions from the St. Louis Fed.
Posted by Hellasious at Saturday, July 03, 2010 23 comments:

Right before the BLS employment data, a chart of the Monster Employment Index. (*) 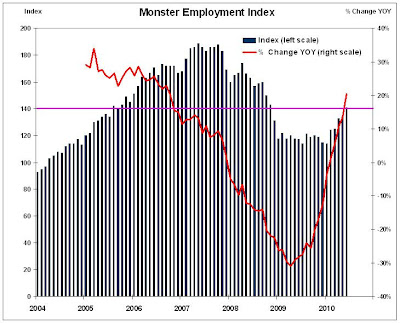 Monster Employment Index
The index is now back to 141, where it last was almost two years ago (November 2008 = 143).  The year-on-year comparisons are quite strong (+21%) but the absolute level of job demand remains quite weak versus the all time high readings reached in 2007.  Still, it is a sign that the private-sector labor market has stopped deteriorating and is showing tentative signs of  demand.
Note that this index is not seasonally adjusted.
(*) "A broad and comprehensive monthly analysis of U.S. online job demand conducted by Monster Worldwide, Inc. Based on a real-time review of employer job opportunities culled from a large, representative selection of corporate career sites and job boards, including Monster, the Monster Employment Index presents a snapshot of employer online recruitment activity nationwide."
Posted by Hellasious at Friday, July 02, 2010 1 comment: