Your Deficit Feathers At Work

Government finances are in a parlous state. The 12-month running budget deficit has grown to an astonishing 1.5 trillion dollars, a number so large in the normal context of "money" that it makes dollar signs entirely meaningless. We might as well call them chicken feathers dropping from madly twirling helicopters. 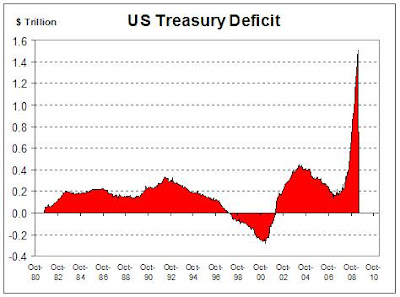 This monstrous deficit has not come about so much because of a shortfall in receipts; rather, it is outlays that are ramping up - vertically. Since September 2007 annual receipts are down 15.5%, but outlays are up by 34.6%. The result is a chart that looks like a snake with its jaws spread wide open to accommodate its oversized lunch (that's us). 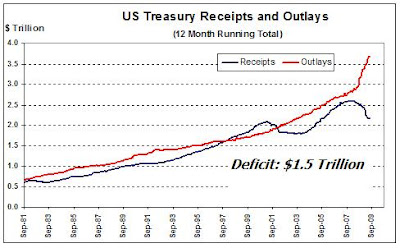 Deficit as a percentage of revenue is now at a record 70%, double the previous high reached in 1983. 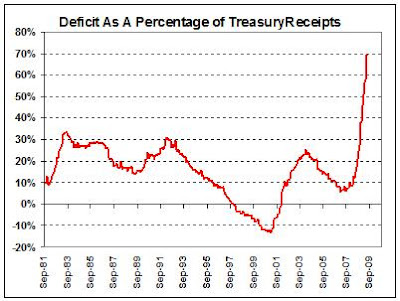 Where is the extra spending going? In just the 11 months of the current 2009 fiscal year (it ends in September) outlays have increased by 512 billion versus the same period last year. The major spending increases from 2008 are shown in the chart below: 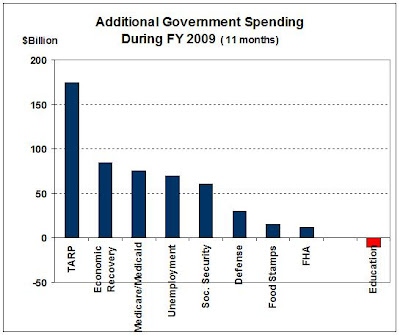 Where The Extra "Feathers" Went
The Treasury's Troubled Assets Relief Program (TARP i.e. direct bailouts for the financial sector) is by far the largest user of extra feathers at a massive 175 billion and accounts for a full 1/3 of the additional spending. By comparison, spending on all other economic recovery programs increased by less than half that. Interestingly, spending on education dropped by 10 billion.

I truly do not see how we will ever climb out of this deficit hole, without seriously reforming fiscal policy. Where are the massive initiatives to transform the U.S. into a localized green economy? Where are the incentives to use less imported oil and to rely on wind, solar, geothermal instead? Where are the subsidies to overhaul the antiquated electricity grid?

Why are we spending tax money to promote buying new cars without requiring them to be low or zero emissions? Why are we providing 8,000 feathers at a pop for houses, but don't insist they are highly energy efficient and have solar roofs installed?

Why is Mr. Obama's government so stubbornly insistent on following the old Bush/Bernake/Paulson agenda? Where's the outside-the-box thinking? The president is perilously close to wasting his entire political goodwill on a mild reform of the health system, while at the same time feathering the nest of a corrupt financial sector.

Taxpayers are in danger of becoming plucked chickens with nothing to show for it.. 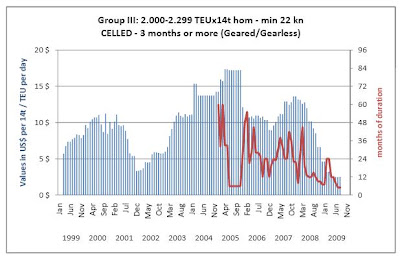