May You Live In Interesting Times

The post’s title is a well known Chinese curse.  For financial markets, the equivalent (and ambivalent) saying is “May you trade in volatile markets”. Remember, it’s a curse not a blessing.

Long term equity investors hate excitement and love to be bored. They buy, they hold, they prosper. For them "interesting" is synonymous with fundamentals and value;  their heroes are Graham, Dodd and - above all - Buffett.

Traders, on the other hand, love excitement - known as volatility in markets. They buy, they sell, they short, they cover, they scalp. For them "interesting" is the equivalent of precipitous declines followed by massive rallies, preferably within the same day.  Their heroes are the anonymous designers of black boxes and whoever can get their network nodes as close as possible to the exchanges' transaction mainframes.

Up until the start of 2018 US markets were "boring" in the sense that buy and hold, the trend is your friend type of strategies worked best.  Score one for Buffett and cohorts.

The rest of the year, however, has been heaven for the practitioners of the Dark Arts.  So much so that it was actually trades on first and second derivative volatility indices (VIX and VVIX) that drove markets into several tailspins (see VIX chart below). Game and set, so far, to the Bad Boys.  The match is still undecided, but it increasingly looks like they will win this one. 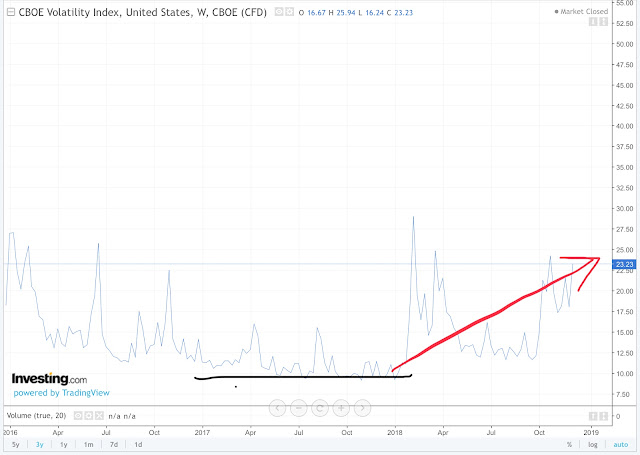 Back in 2006 I started this blog because I saw the threats posed by the Debt Bubble and its derivatives which had expanded and permeated the “real” economy to an unprecedented extend, particularly in the real estate sector.  What followed nearly threw the global economy into a new Great Depression, averted only because central banks and governments were willing to employ unconventional weapons in the battle against asset deflation.: Quantitative easing, zero or even negative interest rates, massive bailouts for the financial sector. In some ways we are still relying on them, albeit to a significantly lesser extent than previously.  If nothing else, it is now a commonly held belief that the powers that be will always be there to rescue the system.

I beg to differ.

Oh, bankers and most politicians may wish to repeat the process when the need arises again - and it always does - but I'm not at all sure that they will be allowed to do so.  I interpret the rise of populism and right wing political activism to a strong undercurrent of anger amongst the former middle class, now relegated to "working poor" status.  Basically, they now see financiers and bankers making billions after they were bailed out with public money, while they themselves struggle to make ends meet.

So, another volatility index which is today even more significant than VIX is PAX, i.e. Political Anger index, shown graphically below.... it's from the Yellow Vest turmoil in France, but we are also seeing similar anger simmering just under the surface in Great Britain (Brexit), Italy (Five Stars), Germany (AfD), and of course the USA (Trump). 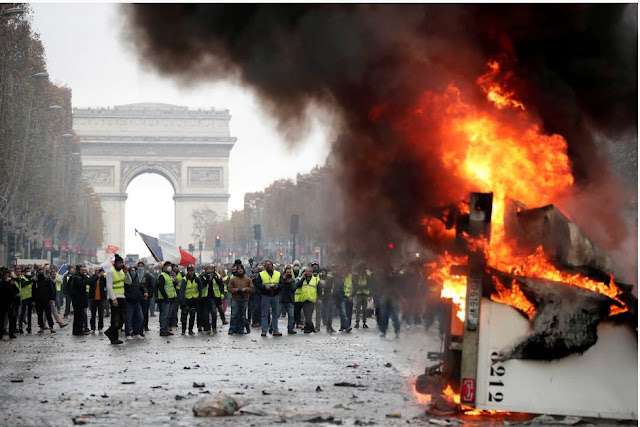 Posted by Hellasious at Saturday, December 08, 2018