Higher Taxes On the Horizon?

Federal debt has jumped a massive $3 trillion in just a few weeks and now stands at $26 trillion, or 137% of last year’s GDP, the highest on record.  Given that GDP will plunge a minimum of 6% this year, federal debt  will reach at least 146% of GDP by the end of 2020.

Sooner or later, someone will start worrying about the federal budget deficit, which closed 2019 at almost $1 trillion;  currently, the Congressional Budget Office expects it to reach $4 trillion in 2020, a massive 22.5% of this year's projected GDP.  That's WWII levels, but without the boost to the wartime economy which came from increased production and employment.  Indeed, the exact opposite is happening, as almost 40 million jobs have been lost and the economy is tanking (no pun intended).

So, let's ask the tough question: how will this massive budget deficit be reversed?  Sure, the economy will bounce back to a degree and boost tax revenue, but certainly not nearly enough.  Taxes will have to be raised, and pretty soon.

Can they be raised?  Certainly - the corporate tax rate is the lowest it has been in 80 years and receipts the lowest in 20 years, even as the economy boomed after 2010.  Indeed, last year's corporate tax revenues were just one third (!!) of those in 2005. 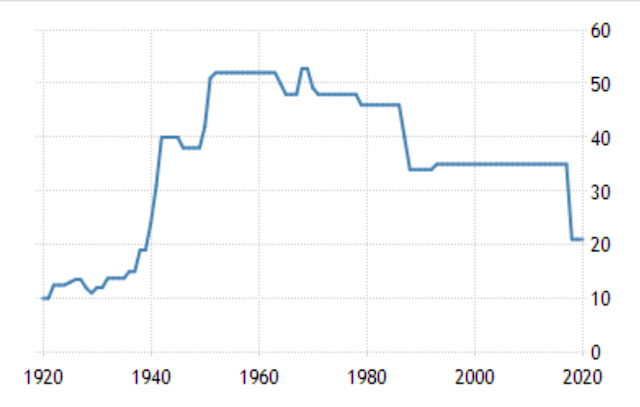 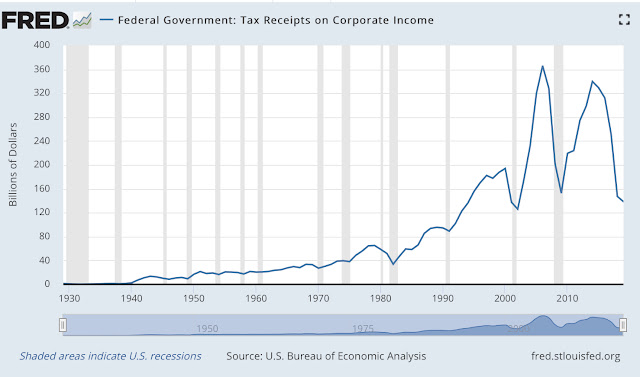 Sure, it's too early to start raising taxes on anything when the country is trying to come out of the COVID19 crisis.  But it's certainly not too early to start thinking about it, and to start considering what such a tax hike will do to corporate earnings and stock valuations.

Stock valuations, you say?  Isn't NASDAQ making new all time highs?  Yes, it is... I really don't know what some people (and their flash algo trading machines) are smoking...