Some of us remember Alan Greenspan’s “irrational exuberance” quote in 1996, his way of signaling that the stockmarket’s dotcom craze was founded mostly on mass psychology rather than earnings expectations.  He was right, of course, but way, way, way too early, as NASDAQ peaked a long four years later and at stratospheric levels compared to 1996. As Keynes has purportedly said, markets can remain irrational (far) longer than you can remain liquid. 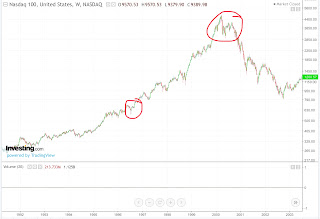 To draw a sort of a parallel with the present, share prices are rebounding after the plunge caused by the COVID19 pandemic, with investors betting that new vaccines and drugs will allow the global economy to resume growth very shortly.  Are they rational?  Yes, and no.

Yes, because human ingenuity (aka Science and Technology) works wonders when applied on a massive and coordinated scale.  Remember, we went from the Wright brothers flying a few yards over the Kitty Hawk sands to landing on the Moon in just 60 years.  Medicine is trickier, but I have no doubt that we will eventually find ways to combat COVID19.

No, because viral pandemics take time to die out, even with effective vaccines.  Not only does it take time to produce, distribute and administer them, it also takes lots of time for herd immunity to reach a high enough level, even after vaccination.  We need around 60-70% of the global population to develop effective immunity, either through vaccination or natural antibodies, in order for COVID19 to be dealt with.

Past modern era pandemics such as those of 1918, 1958 and 1968 took almost 3 years to burn out on their own.  Horizontal, massive national lockouts were not imposed back then, so the general population was rapidly infected, leading to millions of victims.  By the same token, herd immunity was also rapidly established and the virus waned.

Today, human lives are considered more precious, and public opinion is shaped more by social media than anything else, leading to a “save lives” vs. “save the economy” dilemma (false dilemma IMO). Thus, we can expect more restrictions to stay in place for longer and even strict lockdowns to be reimposed as the viral infection plays out.  The effects on economic activity are pretty obvious, and so are the risks for corporate profits, dividends and share buybacks.

So far, investors believe that central banks will save the global economy (and thus markets) by printing as much money as “it takes” until medical science comes to the rescue.  (They also seem to bet on vaccines being available in months rather than years.)  However, this is not a temporary liquidity or credit crisis, at least not for a big chunk of consumers and companies out there.  It is an earnings crisis.

Lockdowns have permanently and irretrievably erased earnings and cash flows for a slew of companies and their employees: the entire travel, hospitality, entertainment, gaming, sports, restaurant, leisure, education, the biggest chunk of retailing, oil and gas, transport, logistics and related services... the list is pretty huge, actually.  On the heels of massive layoffs and/or forced time off with minimum wages come mortgage, consumer and student loan delinquencies, hitting the banking sector hard, as well.

Bottom line: markets are hoping for, and discounting on the upside, a very, very rapid recovery from the COVID19 crisis.  IMHO, they are very, very early.