Quotes For A Future Decade

Greece Got Run Over By a Reindeer

What gives with Greece?  If we look at only one, narrow, set of the statistics, i.e. government debt and official GDP figures, and compare them with other nations, then by all means Greece is essentially bankrupt - just as so many fear-mongering "analysts" claim.
But... Disraeli's saying "lies, damned lies and statistics" is always a good piece of advice.  Even if he actually never said it himself.
So what should we look at?  Two facts:

See anything grossly out of line?
One has to wonder how "the market" operates sometimes, eh?  Looks like Greece got run over by a reindeer this Christmas.  On purpose..?
Posted by Hellasious at Friday, December 24, 2010 8 comments:

It's The Politics, Stupid!

Everyone's taking potshots at the eurozone these days and  given the number and  clumsiness of European "leaders" running around in the open it's like a turkey shoot down at the country fair.  Even those who couldn't hit a barn at 100 ft. can go home feeling like sharpshooters.
Nevertheless, analysts from outside Europe's "hard core" have it all wrong.  They presume the eurozone to be all about finance and monetary policy and, having made this fundamental mistake, conclude that the euro is untenable, no more than a rickety structure about  to crash as weak-link peripheral countries like Greece and Ireland (or even - perhaps - Spain ) buckle under the strain of their large debts.
However, the establishment of the European Union over fifty years ago and the adoption of a common currency are not guided by money and economics, but a common vision for peace and prosperity after centuries and centuries of constant, bloody war.  Since 1300 AD (at least) there has never been a period of 50 consecutive years of peace in Europe - except now (excluding the "police action" in former Yugoslavia).  That alone says a lot.
There is no way that Europeans and their leaders are going to let the euro and the EU collapse;  there is simply way too much at stake.   Does anyone seriously think the Germans - to name only one nation - want the EU to fall apart?  The Europeans who arguably suffered the most as they lost not one, but two world wars? C'mon..
To paraphrase Bill Clinton, it's the politics, stupid!
So,  here's my wish for Christmas 2010 : Peace On Earth.
Have a wonderful holiday, all.
Posted by Hellasious at Thursday, December 23, 2010 7 comments:

The Stupidest Cut Of All

Unlike the French, the British are most definitely not a nation of active protesters and rioters.  So when they take to the streets, smash shop windows, throw chunks of steel-reinforced concrete, set fires and attack Prince Charles's Rolls Royce (a smashing counterpoint to austerity, old boy) you know something is terribly wrong.
All this is caused by the conservative government's decision to cut university funding by an astonishing 80%, passing the bill on to students and resulting in doubling and tripling of tuition fees.  Since most students can't afford such a massive hike, they will end up with - what else - taking up loans of up to $63,000 for three years of study (the normal course in a UK college).
I won't elaborate much on why slashing education spending is the stupidest cut of all because I consider it to be self-evident to anyone who can fog the mirror and count past ten without the aid of his fingers.


But I will say this:  we have all of us in the West rolled up our manufacturing and unceremoniously packed it off to China (why else do you think China's energy use soared 100% in a mere five years?).  Instead, we were supposed to become post-modern vibrant economies based on technology, design, know-how, smarts;  in a word: education.
Well, Mr. Prime Minister Cameron, to quote from one of your famous countrymen, Goodbye To All That. Robert Graves was educated in Oxford just like you were, so I'm sure you understand my allusion to the needless slaughter of an entire generation of young men during WWI,  and the figurative parallel with today.
The question is, will your children?
Posted by Hellasious at Friday, December 10, 2010 28 comments:

Energy: A Tale Of Four Nations

I do an occasional post on Green/Low Carbon/Sustainable matters.  The following four charts are quite illuminating, in my opinion (source: IEA).  Click on each to enlarge.
Total primary energy supply by type 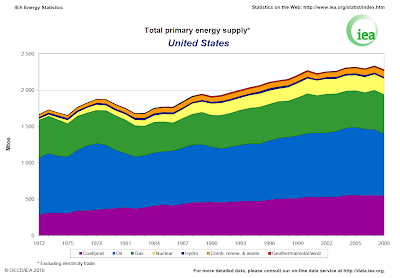 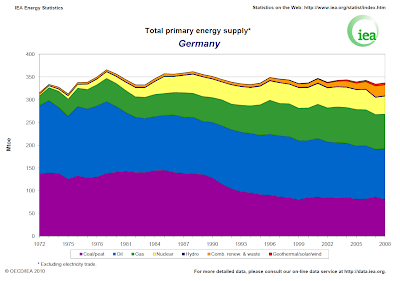 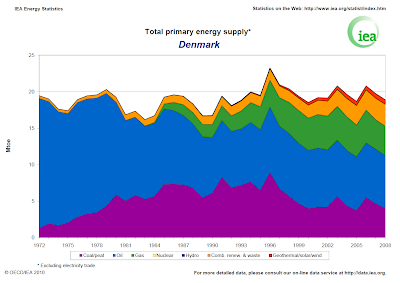 Denmark: They're Doing It Fast
I have saved the "best" one for last.  What is going on in China is best described as scary as, well, Hell. 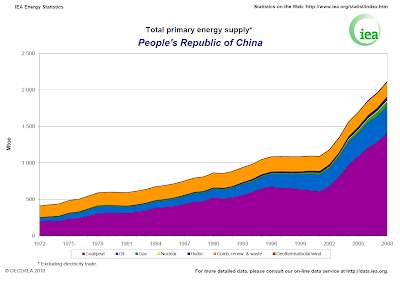 China: Heaven Help Them (And The Rest Of Us)

Chart: Statistics Denmark
What did Denmark do so right? Looking at its energy chart above we observe a tremendous shift away from oil and coal and into natural gas and renewables.  That was no accident;  and it resulted in, among other things, Vestas becoming the world's largest wind turbine company. It's very definitely possible to go green and prosper..
Posted by Hellasious at Wednesday, December 08, 2010 6 comments:

It's been just a few days since my "Modest Proposal" post and the ECB is (finally) poised to intervene in the government bond market, looking to buy PIG(S?) debt in the secondary market.  Excellent decision, if I may say so myself (insert false modesty).  And to be really effective it should be a massive, knock-out blow.  Hopefully ECB has some canny market operators in its staff who know how to act for maximum effect.
But as my proposal detailed, it's not enough for the ECB to just buy and hold existing government bonds on its books.  The second step in this process, the exchange of old bonds for new ones at cost resulting in a reduction of debt by 30-50%, ought to follow immediately.  The benefits to the national economies from a lower debt load and smaller interest payments would be very significant, making the market's reaction to the ECB operation even more pronounced.
Better yet, if the ECB exchanged the national bonds with Euro-bonds that are - almost certainly - coming, we would be talking about a Perfect Storm hitting the shorts.
Posted by Hellasious at Thursday, December 02, 2010 11 comments: