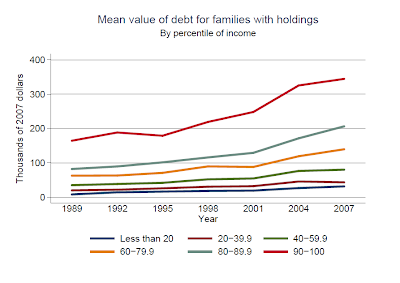 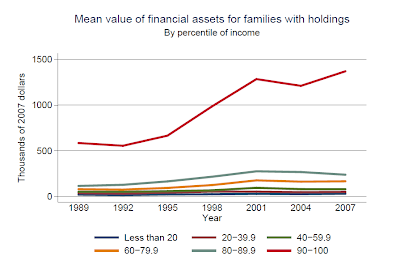 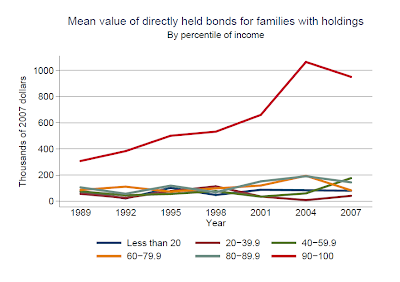 Of Men And Their Donkeys

OK, Greek voters did what they could, never mind what they should.  In last Sunday's elections they favored one of the pro-eurozone, pro-bailout parties, admittedly with a slim (if comfortable at nearly 3%) margin over its left-wing competitor who called for tearing up the bailout agreement.

Greece is in an unprecedented fifth year of deep economic contraction with unemployment  over 22%.  If pushed too far by some of its dogmatic EU partners, Greece will simply fall apart and become a virulent failed state in the heart (yes, the heart) of Europe.  Certainly, reforms in the Real Greek Economy (tm :) are desperately and urgently needed, since the country had previously swallowed hook line and sinker the imported Pump - Borrow - Spend model for generating so-called "growth".

It wasn't really its fault, if one of course overlooks cronyism, paternalism, corruption and cheating endemic in Greek politics since the early part of the 19th century (some would go as far back as Pericles).

There is no use, no profit, nay nay no gain at all in flogging a horribly overloaded donkey.  All we will get is a dead donkey and an upset cart, instead. 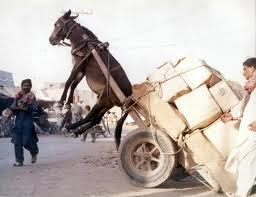 What's to be done?  Here are some suggestions...

1) Stop beating the crap out of them.  Yes, that means mostly you Herr Schauble - God Above Mein Herr, STFU!!
2) Provide some immediate relief from the most onerous clauses of the Bailout Agreement by (generously) extending the time needed to reach a primary budget surplus AND reducing the size of the surplus envisioned.  Give them, say, five extra years and 1-2 percentage points less on the surplus needed.  In any case, I bet they will do better than that, if at the same time...
3) Promote sizable investments in the sectors where the Real Greek Economy has obvious comparative advantages: renewable energy (oodles of sunshine, wind, geothermal AND huge tracts of unused real estate up in the mountains of arid islands), shipping (e.g. at least three big shipyards sit empty), tourism (an old saw, but true nevertheless), second/retirement housing, organic/quality farming, software design (It's true, check it out. Highly educated and skilled professionals go for a song in Athens).

In sum, focus on REAL not just monetary/budgetary issues.  Go to it and lay of that damn whip, because what goes around comes around (and that also means you Mr. Fico, Prime Minister of Slovakia).

"...Investment? With your personal money, dear generous banker? Of course investment makes sense.
But no decent investment can start until REAL asset prices have come down in a significant way."

Here's a chart as an answer... 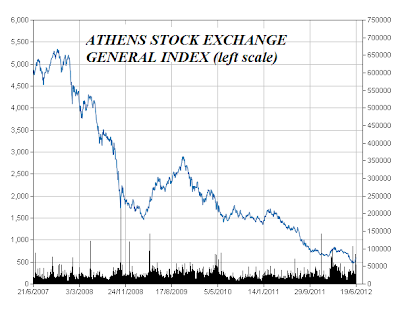 I think 90% is pretty significant, won't you say?  Here's another bit: at current prices, total market cap for the Athens Stock Exchange stands at a ludicrous 10% of GDP.
Posted by Hellasious at Monday, June 18, 2012 3 comments: 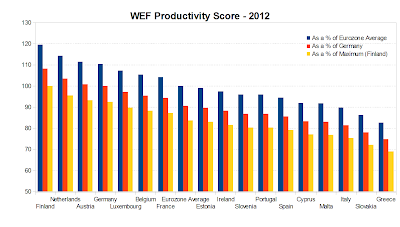 From an article in today's NY Times...

“The market is massively short Europe,” said a hedge fund trader based in London not authorized to speak publicly. “There is just a feeling that it’s too late for steps like deposit guarantee schemes to help Greece or Spain.”


In the last couple of years I have learned - the hard way - to never overestimate the ability of European politicians and EU mandarins to agree on a rational way to deal with the Debt Crisis.  The stubborn dogmatism of Germans and the flip-flops of the EU Commissioners alone can fill a book (and they will, when the postmortem is eventually performed).

Yet, things are clearly coming to a showdown: Spain is now on the ropes, a country that simply cannot be allowed to fail catastrophically as it will drag down the entire world with it.  No, I am not exaggerating - Spain is the world's 12th largest economy at $1.5 trillion (by comparison, France is at number five with $2.8 trillion).

It is beyond obvious that these two countries can't possibly share the same monetary policy, they can't possibly use the same currency - unless...  they can also cobble together a common fiscal policy, i.e. agree on common tax, pension, labor, etc. laws.

It's showtime, folks... if the Eurozone countries can't agree on fast and concrete steps to deal with the debt/monetary crisis the entire EU will fall apart.  Notice I say EU, not just Eurozone, and I firmly believe this.

There is a glimmer of hope that European leaders will finally grow up and lead - as opposed to just preach dogma ex-cathedra and/or wring their hands. Again... the European Union was founded to establish peace in a continent ravaged by continuous wars for centuries.  The euro - enfin - is all about peace, not specie.

If (big if) there is real movement towards rational solutions (again, not dogmatic ones), the market is going to react violently upwards - and that's the reason for the NY Times article excerpt... that "massively short Europe" bit is darn intriguing...
Posted by Hellasious at Sunday, June 03, 2012 No comments: