The Socialist leader Francois Hollande won the first round of French presidential elections and is now the favorite to win the second and final round on May 6th.  Polls show him leading Sarkozy by a wide 10% margin (55% vs. 45%).

And if Parisian taxi drivers can be a reliable prediction source, Hollande is definitely going to win (smile)... I was in Paris last weekend and one particular gentleman was a voluble Hollande supporter (oh monsieur, Sarkozy no good pour la peuple, les pauvres, you oonderstaand?). 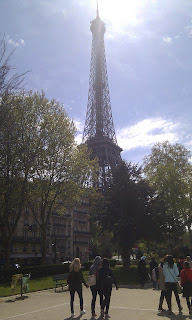 And if France is not enough, parliamentary elections are being held in Greece on the same day.  For the past 40 years the country's two main parties were used to getting a combined 80-85% of the total votes, counting on graft, corruption and paternalism.  No more: the crisis has stripped them bare and made their horrible mismanagement apparent to everyone;  they will be lucky to get even 40% together.  The Greek Parliament may end up representing 8 or even 10 parties, a unique situation in its modern history (4-5 parties is usual).

Depending on the total number of parties that finally make the cut (a minimum 3% is needed for entry), anything from 5 to 7 of them will be either on the extreme left (there is still a Stalinist Communist Party in existence) or the extreme right (a fascist fringe that used to poll 0.2% is now showing up at 5%).   Not a happy turn of events, because all of them want Greece to get out of the eurozone, one way or the other.

The point is this: If France and Germany don't see eye to eye on practical matters very soon (say, by June), then the EU will fall apart for want of a cohesive substance more than the hot air constantly emanating from Brussels.

France holds the first round of its presidential elections this Sunday and Greece has scheduled  parliamentary elections for May 6, coinciding with the second and decisive round for French elections.  In France the Socialist candidate is the frontrunner against the incumbent conservative Mr. Sarkozy, while in Greece popular sentiment is hugely against the entrenched two-party system that so obscenely mismanaged the country for the past four decades. (Germany will hold its federal elections in September 2013 - or earlier under certain circumstances).

Is a likely political shift in two countries enough to steer the EU towards a new direction? Perhaps it is. France is, by far, the second most important nation in the Eurozone (and perhaps number one from a historical EU perspective), while Greece is currently undergoing history's largest debt restructuring.

Where are you going, Europe?

And what direction could this be? Well, in my opinion, there are only two possibilities:

a) The Eurozone falls apart, to be followed shortly by the breakup of the EU itself.
b) Europe's new(?) leaders finally realize that a monetary union without fiscal and real political union is untenable, so they take bold steps to unite the EU in fact.

I believe that no sane European wants the first choice - there is just too much at stake to give up.  The last seven decades have seen the longest period of uninterrupted peace in Europe for many, many centuries;  remember that the EU was established chiefly to avoid future wars and not as a means to create efficiencies of economic scale.

It is not pleasant to watch Europe going through its current pains.  Hopefully, however, they are birthing pains and the result will be a better, more truly united  Europe.

This is the first post in some months... but it's not that I've been away or extraordinarily busy.  Rather, I've been "digesting" all that has been happening around the global debt crisis, particularly in Europe.

There's no need to analyze the eurozone's debt woes - this is a horse that has been beaten to death so many times already, and by so many informed, misinformed and "deformed" commentators,  that I feel I have nothing original to add.

Instead, I will once again revert to my oft-repeated thesis: that this here "debt crisis" is but a symptom of a wider, more virulent disease, and that by focusing on it, rather than trying to confront its deeper causes, we are making things that much worse for ourselves and our children.  What good does it do to provide daily doses of aspirin to a patient with pneumonia?  Yeah, the fever will go down, but the patient will eventually die.

And this is exactly what we have been doing... at least, that's what my stomach is saying after "digesting" the news for these past months.  So... It's the (real) economy, stupid!! .. is today more apropos than ever before.  Politicians, economists and even "smart" businessmen are constantly looking for monetary fixes (i.e. liquidity) to what is a fundamental, paradigm-shift problem.  Earth to Everyone: It can't be done.

Look at Europe's scape-pigs: Portugal, Italy, Greece, Spain... but also Ireland, the UK - even France (and Germany won't be far behind once China dips).  Everyone is mired in doom and gloom and the (real) economy is going absolutely nowhere.  Austerity, reform, restructuring, debt forgiveness... it has all lead to precisely.. nowhere.  Unemployment is very high (23% in Spain, 22% in Greece, etc etc) and still rising, earned income has tanked, productive investment has collapsed... I can go on and on.  But in one word, the real economy absolutely sucks (pardon my french).

We desperately need a serious Paradigm Shift.  Quit stroking the bankers and start stoking the fires - or, rather, start spinning the windmills, laying out the solar panels, drilling the geothermal wells, building the electric economy...

It almost doesn't matter what, but the when must be NOW.