If At First You Don't Succeed... Repo More

And the liquidity crunch keeps rolling on....

The Fed decided to increase (again) the amounts it offers into the repo market: the O/N goes from $75 to $100 billion per day and the 14-day term repo doubles from $30 to $60 billion three times a week.

That's A LOT of liquidity... like ... "A billion here, a billion there, and pretty soon you're talking about real money", as Senator Dirksen supposedly said many years ago.

Now, I know that repo is not nearly as sexy as the S&P 500, oil prices, or even gold.  BUT, here's something to sober you up a bit:

In the 4th Quarter of 2018 equity trading in the entire world came to some $26 Trillion - that's the total for three months, some 60 trading days, or around $430 billion per day. That's the global total: NYSE, NASDAQ, London, Tokyo, Frankfurt, Paris, Toronto, Milan, etc etc etc

In other words, if the US repo market gums up, the world stands still - as it nearly did in 2008.  Thus, the Fed's understandable anxiety.
Posted by Hellasious at Thursday, September 26, 2019 7 comments:

The big demand for the term repo - cover was 2.07x - is revealing, as I wrote in the previous post.  Strong demand for longer repos point to liquidity concerns.

Congressional developments concerning a possible investigation into Mr. Trump's conduct came after the market had closed.  Given that the repo liquidity shortage started a week ago, it is quite possible that the market had sterted hearing rumors early on.
Posted by Hellasious at Wednesday, September 25, 2019 No comments:

As I had expected, the Fed announced that their repo facility will continue until at least October 10 and will provide liquidity for 14-day periods too, as well as O/N.

From the Wall Street Journal:

The New York Fed said on Friday it would continue to offer to add at least $75 billion daily to the financial system through Oct. 10, prolonging its efforts to relieve pressure in money markets.
In addition to at least $75 billion in overnight loans, the Fed said it would also offer three separate 14-day cash loans of at least $30 billion each next week. The Fed will conduct further operations as needed after Oct. 10.

This adds up to at least $465 billion per week.  That's far from peanuts, even if most of it is O/N, i.e. it rolls every day - except for the weekend, of course, when it's longer.

The article quotes a Fed official claiming the current trouble stems from a sticky "distribution process" of liquidity, i.e. that excess reserves may be concentrated among few banks instead of many - something of a liquidity oligopoly (my term).

Even so, why aren't these banks supplying the repo market with cash as they regularly did until last week?.Are interbank credit lines full, all of a sudden?  Were they scaled back, perhaps?

It is curious that this "stickiness" evolved within just 48 hours and is now considered so serious that the Fed is taking (semi?) permanent action.  Obviously, it expects the stickiness to stick around for a while.  The 14-day money is the key indicator of this, otherwise they would just do a few O/N's and quit.  And note the bit about "further operations as needed after Oct. 10".

Watch closely the 14-day repo demand: if dealers bid for significantly more than $30 billion at a time, it means the market has serious, ongoing liquidity concerns.

No matter how the Fed is trying to spin this, actions are louder than words - and, quite plainly, their actions indicate that they believe the lack of liquidity to be no passing matter.


For now, I am going to "stick" to my suspicion that risk is being dialed back by some major market participants, who prefer to keep their cash parked with the Fed instead of supplying it to the repo market. Do they know something we don't? Is there a Black Swan flapping its wings out there?

"I hold this truth to be self-evident, that a debt crisis cannot be resolved with more debt"

This, dear reader, has been Sudden Debt's masthead for 12+ years, and it served well ever since I started writing in late 2006. I am changing it as of today.

Why? Because I want it to be more in tune with what is happening now and, maybe, in the future.

We all know that the global debt bubble burst spectacularly in 2007-08, that governments and central banks intervened with enormous cash injections, and that economies, mostly and eventually, avoided disaster.  (Some didn't: Greece collapsed 10 years ago and is still trying to recover.) The Debt Crisis is yesterday's news, even if its pernicious effects are still with us.

Today, we live in the Brave New Monetary World where zero and negative interest rates are the norm, where central banks engage in quantitative easing operations lasting decades and amounting to trillions.  Where serious, real money investors do not so much choose to assume risk as forced to.  For example, if you run a huge public pension fund are you to buy a 10 year AAA government bond and thus guarantee losses? Or, even worse, if you run a bank, do you take deposits and make loans at such thin spreads that you are guaranteed to lose money after expenses and write offs?.

(I note with interest - pun intended - the exception of Norway: they just raised interest rates, again! Are them Vikings nuts? Or is it that they own the largest sovereign wealth fund in the world, valued at $1.1 trillion and aren't willing to throw money away?)

In today's brave new world Time Value Of Money, the bedrock of financial sanity, is out the window.  It's as if the arrow of time is running backwards, the Second Law of Thermodynamics involving Entropy (aka there's no such thing as a free lunch) is inoperable, that Perpetual Motion machines actually exist.  If negative rates were operative in agriculture, you would always reap less than you sowed.  I could go on, but you get my drift.

It worries me that no one is screaming bloody murder about it, that Bloomberg, Reuters, WSJ, the FT, all take it more or less in stride.  It just aint't natural. I mean it literally, it goes against natural law - unless the Universe has started shrinking.  Which, as far as I know, it hasn't.

Apart from their unnatural state, negative rates resemble something I loudly warned about well before the CMO, CDO, CDS, etc crisis blew up in 2007-08.  Namely, that if you take a pile of dogshit (subprime loans) and cut it into pieces (securitize and tranche it), then little piece A is magically transmuted into gold, B becomes silver, C is copper and so on, until only the tail end bit is still poop! Ahuh...that didn't work out great, did it?

Likewise, if an economy cannot be productive and competitive with 2% interest rates, throwing free money at it won't change a damn thing.  MONEY is not the issue!  But, central bankers seem to be like handymen who only carry hammers.  Economy won't grow? Hammer it with money.  Still doesn't grow? Hammer harder!! In the words of Super Mario: whatever it takes (as long as it involves a hammer).

Of course, all of the above is predicated on the thesis that money is, above all, a storehouse of value.  If we abandon that, then ... who cares? Print it, burn it, devalue it, throw it out of the window in a ticker tape or pixel parade.  Might as well eat that seed corn now, eh?


So, what is the new masthead?

I toyed with apocrypha like an equation of the Second Law, but I'm not THAT much of an egghead - and neither are you, right?

"Money For Nothing? Chicks Ain't Free" was rejected as too gauche and NPC..

ONLY YOU CAN CHANGE THE WORLD, MONEY CAN'T

Yeah, it sounds idealistic, starry eyed and all that. But, ya know, (a) it is literally true in the context of this blog and (b) I am a huge fan of responsible, informed social activism - go Greta Thunberg!!

Plus, I become more romantic as I age, hopefully into vintage instead of vinegar. Cheers!!
Posted by Hellasious at Saturday, September 21, 2019 8 comments:

Flood Of Paper Looking For Repo

Following up on the repo market, the chart below shows the daily volume of tri-party repo transactions.  They have ballooned to some $2.5 trillion, up from $1.5 trillion in 2016 (blue line).  The entire increase has come from the Fedwire side, ie. repos involving Treasurys and Agencies as collateral (red line).   If you dig a little deeper in the NY Fed's data you will find that the $1 trillion increase is split roughly  60% Treasury bonds (+$600 billion) and 40% Agency MBS (+$400 billion). 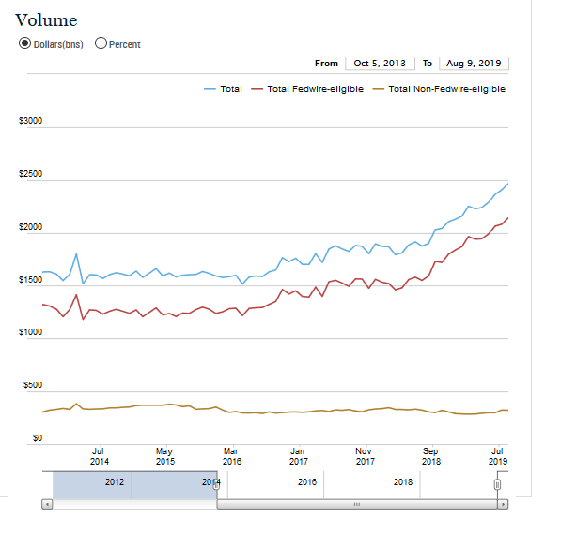 That's a huge increase for such a short period of time, obviously mirroring (a) a raft of new Treasury bond issues to finance Mr. Trump's ballooning budget deficits and (b) lots of new real estate mortgages securitized by the likes of Ginnie, Fannie and Freddie. The shrinking of the Fed's balance sheet also played a role.

At the same time, banks' excess reserves, i.e. a major source of funds that is used for repo funding purposes, have come down from $2.4 trillion to $1.4 trillion.That $1 trillion outflow is funding the increased needs of the repo market, quite obviously.

Let's call the difference between Excess Reserves and Total Repo the Excess Funding Cushion. In early 2016 this cushion was approx. $1 trillion, i.e. there was lots of surplus liquidity around after funding the daily repo market  Today the difference is negative $1.1 trillion, i,e, there is no excess at all.

This means that on heavy repo demand days dealers have a more difficult time finding the liquidity they need and, if lenders get spooked by, say, risky geopolitical events, repo rates will zoom.  Thus, the Fed's intervention during the previous four days.

Analysts are already predicting the Fed's repo funding facility will become a semi-permanent fixture, a new round of QE in everything but name.  I think they have already christened it, too, something like"scheduled OMO", or such.

The takeaway from all this slightly esoteric stuff is simple: monetary liquidity is tightening in the US just as dealers' books are ballooning.  And in the business of trading securities, anything that even smells of tight liquidity creates high insecurity.