I think it is instructive to provide a chart on what is going on in the Federal budget.  Government spending has been flat for almost five years and the deficit gap is narrowing fast.  Yes, part of the flattening out in spending has come from ultra-low interest rates on debt outstanding, but still...  Can't say that the Obama administration is a spendthrift.. 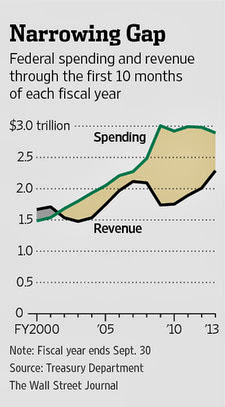 It is getting close to crunch time for the US and its Himalayan-sized mountain of debt.  Right now no one really believes that the world's most powerful and prosperous nation will default, thereby committing financial suicide, over an internecine legislative tiff. I certainly don't believe it myself.
Well.. I don't want to believe it.
But I have a very bad feeling this time.  No, I am not predicting a default.  Rather, my unease stems from the sheer size and spread of the debt problem all around the world. I cannot see how this global FUBAR situation will be resolved without wrenching upheaval, given that political and financial leaders clearly do not want to address the problem at its core, never mind the common people.
I have frequently referred to Permagrowth as the root cause of the Debt Crisis, i.e. the single-minded expansion in the consumption of everything, fuelled by  ever more debt. Obviously, exponential growth within a closed system leads to disaster.
If we do not willingly renounce Permagrowth as our leading economic paradigm what I fear is ahead is an involuntary and abrupt end, one that will result in chaos.
Think of putting a pressure cooker on the stove, with the safety valve closed...
Posted by Hellasious at Wednesday, October 09, 2013 5 comments: