Bring Back The Gipper

April CPI data came in and, just as for payrolls, they were waaaaay beyond expectations, with core inflation (ex food and energy) rising at the fastest pace since Ronald Reagan’s first presidency. But unlike Ronnie’s Fed which had the good fortune to have a giant (literally) as Chairman (Paul Volcker), today we are stuck with a wishful thinking non-professional (Jerome Powell).

Good luck to us all, but mostly say a prayer for the US dollar as global reserve currency.  Because with Jerome and Janet calling the shots, it hasn’t got a prayer...

Core CPI Rising At Fastest Pace Since The Gipper Was Prez

Inflation? Nah... Head In Sand, All Is Fine

Milton Friedman has famously said that inflation is always and everywhere a monetary phenomenon. Despite the self-evident nature of this the Fed and Treasury continue to ignore it because... populism sells.

Here’s the result.. commodity prices are soaring to record highs, in step with the gush of dollars created by the most irresponsible monetary policy in the entire history of the US. 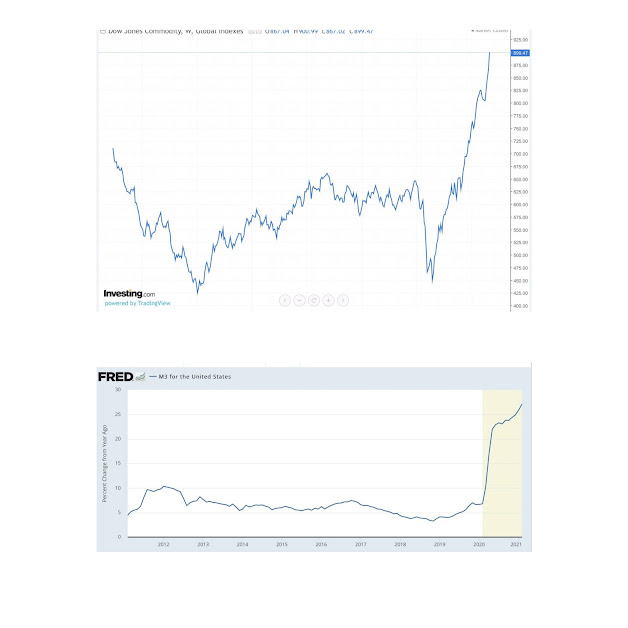 Even the labor market is screaming warnings.  Friday’s payroll numbers came in as a complete and utter surprise, disastrously lower than expected (266.000 vs 1.000.000). Why? Because despite lots and lots of  job openings people just don’t want jobs.  And why should they?  The government is sending out free money to everyone, including an EXTRA $300/week in unemployment benefits.  Predictably, wage pressures are rising, particularly in the leisure and hospitality sector where labor costs jumped a huge 3.6% in just one month.

Job Openings Back To Near Record High

Development Instead Of Expansion

The current economic model focuses on “growth”, ie the constant expansion of GDP, a condition I have termed Permagrowth.  Since 1960 global GDP has expanded from $1.37 trillion to almost $90 trillion today. 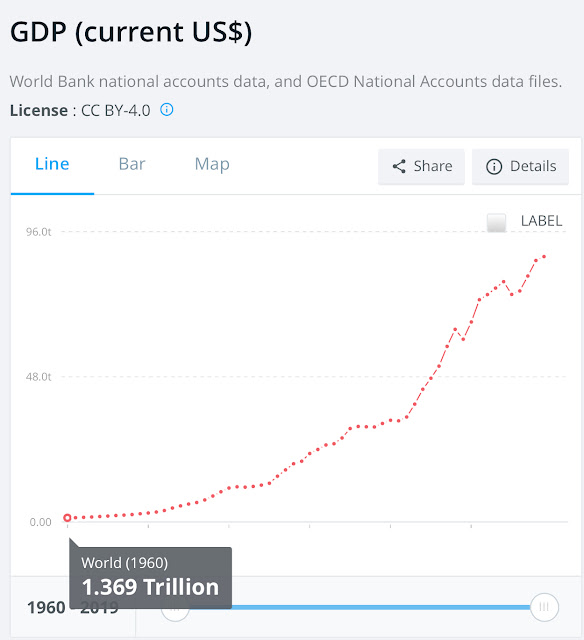 The cost to our habitat is catastrophic, with CO2 emissions exploding. 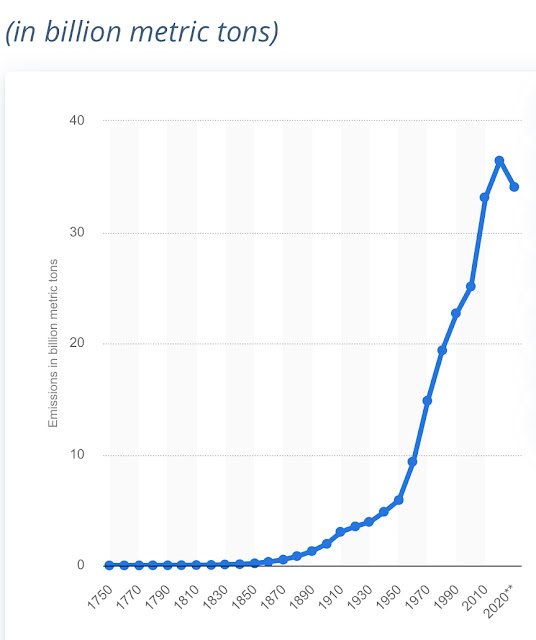 The only solution is to quickly transition to a radically different economic model that will focus on Development instead.

If you thought cryptos are hot and bubbly, look at this: 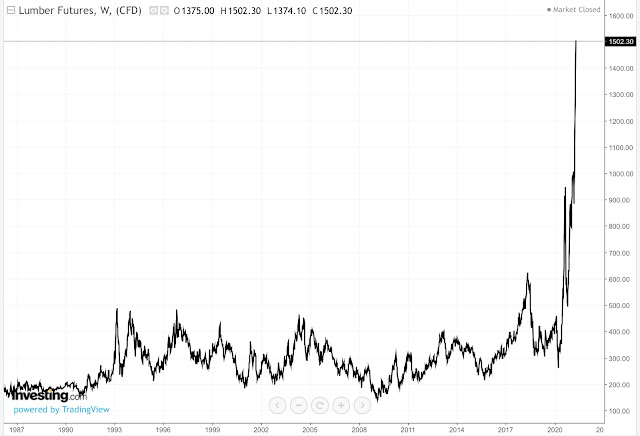 Wood, the most prosaic ho-hum of materials, is rip roaring ahead.  Why? Yes, home building in the US is really going gangbusters, but... seriously, now?

Anyway, yet another nail for the “low inflation” coffin, along with grains and metals.  But, hey, let’s keep printing and see what happens - maybe it will all go away...

Following from my previous post, here’s the second stanza, the historic rhyme..

Although the current bubble may not look the same as the Great Credit Bubble of 10+ years ago, there are troubling similarities.  For one, Wall Street seems to have a penchant for inventing new speculative vehicles that come with initials.  Last time it was CMO, CDS, CDO (squared and cubed), while today’s alphabet soup is ETF, CFD and  SPAC. Another parallel is junk real estate/junk mortgages and cryptos.

Each item/rhyme comes with its own set of problems:

Ok, that’s it for the second stanza - except one more observation: the Archegos disaster is already acting as a catalyst for leverage caution, just like the very first problems with mortgage originators and lenders caused concern back in early 2007.
In the next stanza I will look at the more intangible rhymes, those that deal with anecdotal evidence such as 12 year old speculators, tokens, virtual art, NFTs, and their historical counterparts.
Posted by Hellasious at Wednesday, April 21, 2021 26 comments:

Students of history know that it may not repeat per se but it very definitely rhymes. As Ecclesiastes said 2500 years ago, there is nothing new under the Sun. Let’s take a look back..

The Great Debt Crisis of 2007-09 was precipitated by a wanton disregard for credit risk, particularly in the real estate sector.  Trashy, subprime mortgages were packaged into tranched CMOs sporting ratings as high as AAA and sold to investors.  Mortgage and other loan originators were paid to lend as much money as possible, not to assess the borrowers risk.  They had every incentive to do so, since investment banks were hungry for fee-producing “product”.  Ditto for rating agencies, who charged mightily to provide algorithm-generated ratings, instead of doing solid credit analysis. Furthermore, an enormous side business in credit derivatives such as CDS and CDOs generated even more fees and profits.

The enabling mechanism was that those most responsible for the bubble - originators, mortgage and real estate brokers, loan packagers, investment banks, credit insurers and traders - did not keep any of the credit and market  risk themselves, since they were just fee-creator middlemen who passed the risk on to investors.  In other words, a kind of pyramid scheme.

When the pyramid collapsed, some where caught with too much “raw product” in their “warehouses” (eg Countrywide), others with too much “finished product” for sale on their “shelves” (eg Bear Sterns, Lehman, Merrill) and a few others had taken on too much insurance exposure (eg AIG).  They all failed, merged, or were bailed out using taxpayer money.

At the buyers’ end, banks, mutual/money market funds and pension funds were stuck with paper that was for all purposes worthless and they, too, mostly had to be bailed out by governments. Again, taxpayer money.

As always, there were those few “wise guys” who profited mightily from the bubble’s demise. I don’t need to tell you who they were, they even made movies about them. And, pointedly, they are still around and many are bigger than ever.

The cost of the mess is still with us in the form of zero/negative interest rates, a very weak banking system  and a global economy beholden to cheap Asian imports purchased using vendor finance (eg Chinese and Japanese government bond purchases).

So much for the past then, or, in poetic terms, the first stanza. The rhyme will come in my next post, the second stanza...

The role of the Fed, so goes the saying, is to take away the punch bowl when the party gets out of control. 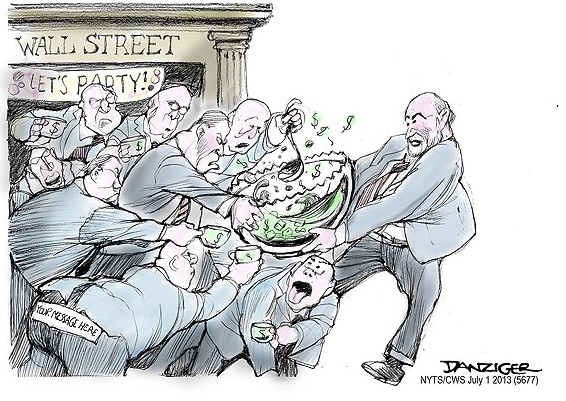 However, today’s Fed is the exact opposite - it insists that the bowl is there to stay until everyone and everything is smashed, literally.  Because the Fed and the Treasury are forcing everyone from banks, pension, hedge and private equity funds, all the way to froth-in-the mouth individual speculators to accept as much risk as possible in order to achieve small and rapidly diminishing returns.  The yield spread between junk and Treasury bonds just hit an all time low yesterday at just 2.59% - chart below.

Imagine that: an income-oriented investor is now forced to accept a very significant risk of losing all of his money to default to make a measly 2.59% more than the safest AAA Treasury. Given that the historical average default rate for high yield bonds is 4.5-5.0%, how rational is that?

And that, among many other signs of excess, may soon lead to a rather unpleasant future, as the next cartoon “predicts” 😂 Have a great weekend 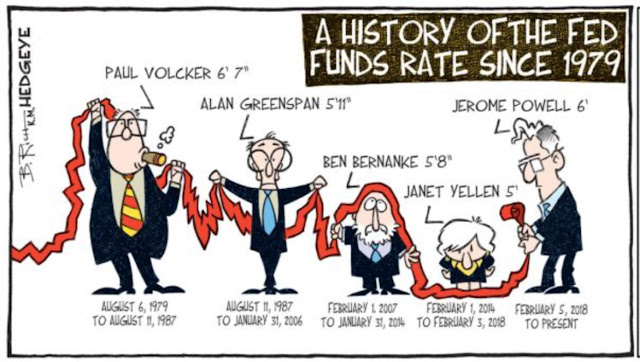 For over 30 years - closer to 40, actually - the yield on 10 year Treasury bonds easily exceeded inflation, making US government bonds an attractive investment for conservative investors like pension and sovereign retirement funds. The benefits to the United States were obvious: the dollar maintained its preeminent position as reserve currency.

But, no more:  as we see from the chart below annualized CPI inflation (blue bars) is running way above Treasury yields (red bars) - that’s where the arrow is pointing. If you can’t see the red bars in the last part of the chart,  it’s not a mistake: yields are way too low to show up. It’s the largest and longest “gap” since the 1980s, and back then it was a healthy reaction/expectation that inflation would cool fast because of the very restrictive monetary policy.

The reason is, of course, the current Fed/Treasury unholy alliance which has the central bank following the loosest monetary policy in history.  Printing furiously, keeping short rates at 0% AND buying $120 billion bonds per month.  It’s all about the Modern Monetary Theory, which goes like this: it doesn’t matter how much and how fast we print money because in the future the economy will expand even faster and will absorb the money without causing inflation. A strategy also known as wishful thinking...

Putting it in medical terms, it doesn’t matter how much you smoke, drink and eat now because down the road you will do what is necessary to be healthy.

More Than A Dozen

According to data from Bank of America presented in a Bloomberg article, since last November equities have seen inflows of an astonishing $575 billion, more than in the last 12 YEARS combined.  Goes a long way in explaining the meteoric rise in stock prices.

Meanwhile, the same article points out that as prices rose trading volume has been coming down - see  chart below. 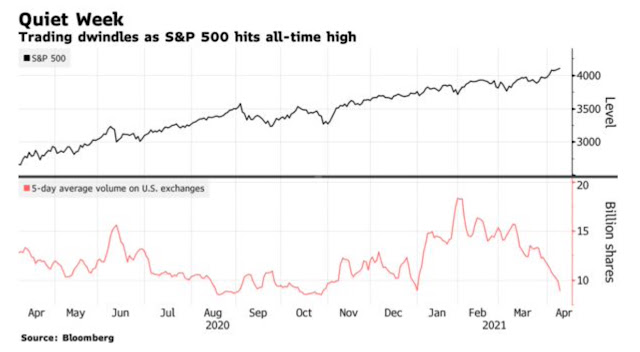 The US stock market is making new all time highs after bottoming out on March 23, 2020, when S&P 500 reached a low of 2200. The gain since then has been a whopping 86% in just over 12 months.  How rare is that?  In a word, extremely.  Looking at the frequency distribution of rolling 12 month returns, such an event has occurred just about.... never! 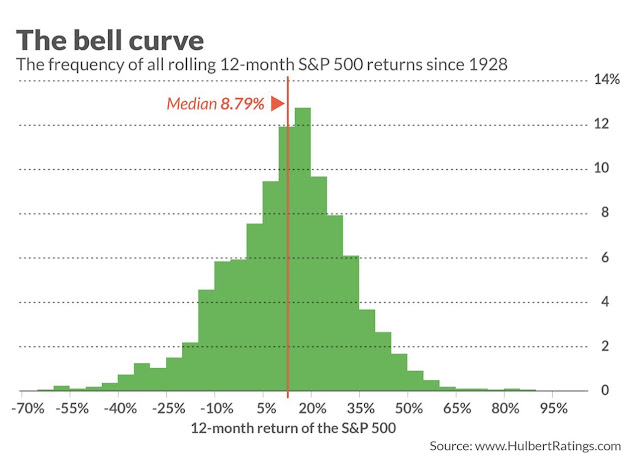 Let’s go ever further out on our assumption Matrix (pun intended) and say that last year’s big drop never happened, and pick up things from the previous high of 3370, pushing it forward to April 8, 2020.  This will produce a 12 month gain of 21%, an event with a frequency of 13%, ie one out of every 8 years. 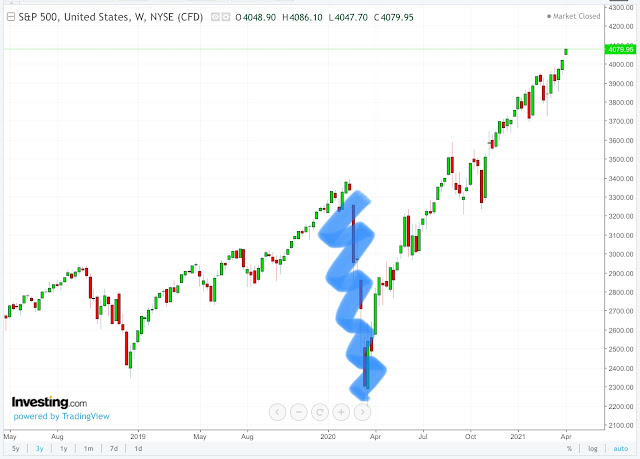 Of course, you can’t just take a big blue marker and wipe out the pandemic from history.  Neither is an 86% gain a truly relevant statistic, since it happened from a deep, panic induced low.  For my money, the frequency band that makes sense is between less than 1% and 13%.  It’s like saying that today’s market is a lottery ticket with the odds of not losing being somewhere between 1% and 13%.

So, if you’re feeling lucky, and I mean REALLY lucky, by all means take the plunge... 😁😁 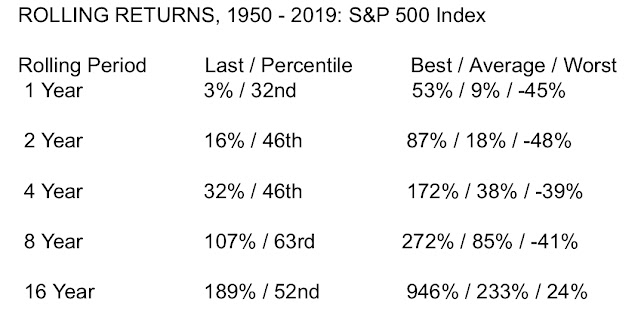 Posted by Hellasious at Thursday, April 08, 2021 No comments: