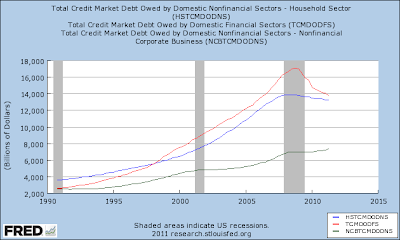 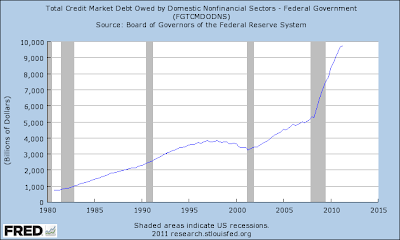 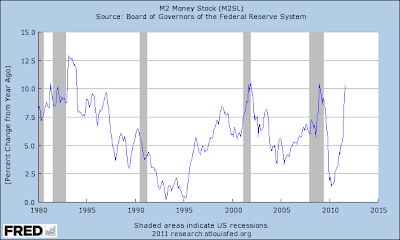 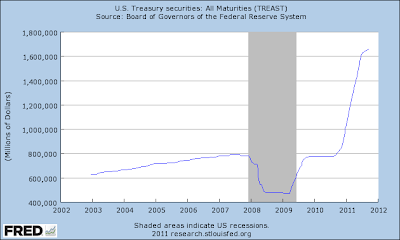 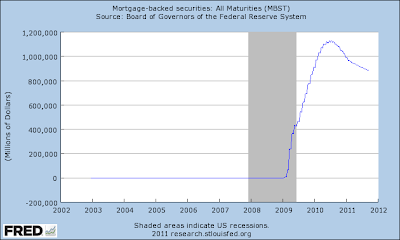 Debt and The Second Law

Debt is a call on future earnings, i.e. it presumes there will always be economic "growth" (however you may define it) in order to produce those future streams of income which will service the debt.  This is a condition I have called "Permagrowth".

But is it possible?

In the "real" world, where physical fact always trumps populist monetary neo-theology, Permagrowth is impossible by definition.  The Second Law of Thermodynamics reigns supreme, i.e. there is no perpetual motion machine - and can never be.

In other words, since Permagrowth is impossible so is Permadebt.

P.S. My blog is getting the attention of "comment advertisers", i.e. advertisers who hawk their wares under the guise of "I love your blog" comments.  Par for the course, of course, and I usually quickly clean up the comment section.  What is interesting, however, is that lately they are hawking gold, gold market tips, etc.  Nice contrarian signal, in my opinion. 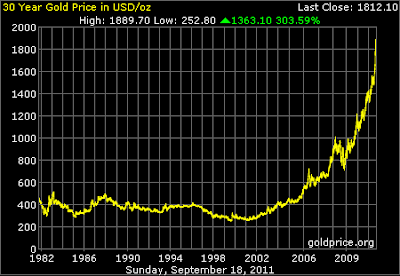 P.P.S. Speaking of such ballistic charts, in a post four years ago (South Seas and China Seas) I posted the following chart, comparing the famous South Seas Bubble with the price of a (then unnamed) shipping company. 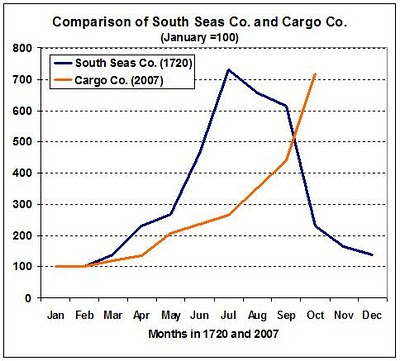 I did not mention the name of the company at the time because I felt it should not be singled out in what was, after all, an industry-wide bubble.  Nevertheless, some readers immediately identified the company as Dryships, a bulk-carrier shipping company.


Four years later, this is what happened.

Other than self-congratulation, my point is pretty simple: beware of all bubbles, no matter how "logical" they seem at the time.  In fact, the more "logical" they appear the closer they are to bursting.  The devil, as always, is in the timing, of course...
Posted by Hellasious at Monday, September 19, 2011 16 comments:

Germany is the world's #2 exporter, very close behind China.  In 2010 it exported a total of 960 billion euro, amounting to 42% of its GDP.  Its trade surplus came to 153 billion euro, almost 7% of GDP.  Impressive stuff, no doubt, and an achievement that Germans are justly proud of.

But, not all surpluses are created equal... 35 billion of that surplus, a whopping 23%, was accounted by just four countries: Italy, Spain, Greece and Portugal.  Yes, to a very large extent the PIGSs' munching at the trough was what kept Germans working in their factories.  And if you just add France, another country that is currently screeching towards the borderline of fiscal probity - at least according to financial markets - the numbers get even more interesting.  Germany's PIGS+F trade surplus jumps to 64 billion, a full 42% of Germany's entire trade surplus. In GDP terms (trade surplus is GDP-additive), PIGS+F surplus accounts for nearly 3% of Germany's economy. 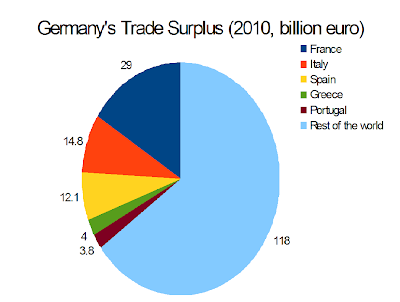 However, short-sighted and haphazard German talk of harsh reprisals are turning the country's best customers into pariah states.  Recently, a German politician even proposed that eurozone members that can't get their fiscal house in order, raus!, should have their flags fly at half mast at all EU sites.  Germany is not making any friends acting in this ham-fisted fashion.

Ah, you may say, Germany doesn't need to coddle dead PIGS anymore and can just export wonderfully advanced stuff to super-charged China. Really?  Germany had a whopping 23 billion trade deficit with China in 2010.

German people have a very serious choice to make here, and Mrs. Merkel is furiously waffling instead of leading and speaking clearly.  From one side of her mouth she's insisting that she's fully committed to the euro, the eurozone, etc.  From the other side emanate dire threats of bankruptcy, default, exit from the eurozone - even the EU itself, all directed at those very PIGS whose consumers are keeping her countrymen happily and gainfully employed.

She's got to tell Germans the truth, at long last: Germany is such an export powerhouse and fiscal icon precisely because the others aren't.  It takes two to tango, Mrs. Merkel...
Posted by Hellasious at Tuesday, September 13, 2011 12 comments: 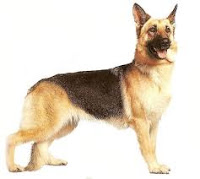 Am I a living, breathing Joe Engineer Contrarian Indicator? Could be...
Posted by Hellasious at Saturday, September 10, 2011 8 comments: 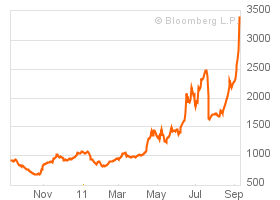 Yes, it means that the central bank will - in effect - guarantee the public debt of such nations, but it will do so only up to a defined limit (the amt. of CDS sold).  The benefits, beyond the immediate de-escalation of the crisis, are:
Mr. Stark's resignation yesterday from the ECB board makes it clear there is sharp disagreement within the eurozone itself on how to handle the debt crisis - fair enough.  But this doesn't mean that things should be allowed to spin out of control.  In such times markets are guided 99.9% by psychology (fear) and cannot be allowed to wreck the entire European socio-economic structure, put together over so many decades.
Posted by Hellasious at Saturday, September 10, 2011 8 comments: