A Blast From The Past

I have been re-reading Gustave LeBon's The Crowd, the 1895 classic on the psychology of herd ("crowd") behavior.  The French social psychologist was the first to scientifically and methodically study crowd behavior outside the criminal classes.
Here are a few bon mots:
I am sad to say that Hitler, Mussolini and Bernays (Freud's nephew) were fans of this book, putting it to ungodly and unhealthy use (Bernays convinced women to smoke).  Ah... propaganda, thy name is Herd.

The Land of "Miracles"


Greece... land of Pythagoras, Plato, Pericles - and more platitudes than you can shake a stick at.

Nevertheless, here's one more from a Greek bank professional: Greece is the land of miracles.  (I'm certain he didn't quite mean it as a compliment).

To wit, ANYTHING can happen there. Here's a handy comparison from recent history. 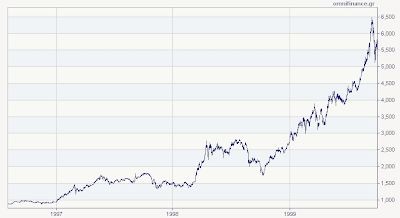 Greek Share Prices 1997-1999
Get my point, via chart comparison?  The place is basically looney-tunes and CANNOT be analyzed or predicted in any rational, by-the-numbers method.  For clues, best dust off the psychotherapy manuals and be prepared for excess, negative AND positive. 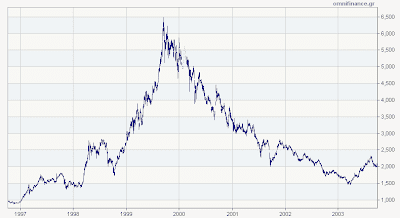 Now, given the excess of emotional swings apparent above, I wonder what may happen to Greek CDS prices in the not-so-distant future?
Posted by Hellasious at Tuesday, May 03, 2011 6 comments: