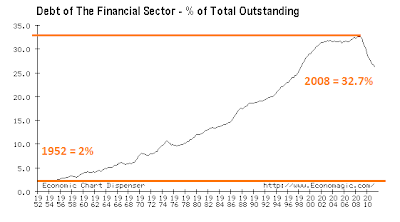 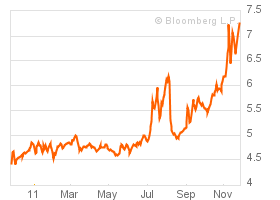 Is There Life After Debt?

Fact: The debt crisis is global - and, yes, this includes the so-called creditor nations, such as China.  After all, in our fiat currency world it takes a debit in order to create a credit.

The way we got into this mess is well known: the West foolishly (even criminally, if you ask me) gave up its industrial/manufacturing base and the high earned-income jobs it generated, replacing them with services and low value-added jobs.  However, it didn't lower its consuming and spending habits to balance the losses, instead it piled on debt from vendor nations, and constructed Rube Goldberg asset bubble contraptions that attempted to generate "wealth" out of thin air (e.g. real estate, derivative-based bonds, etc.).

Anyone Still Making Anything in the US?

As the chart above shows, the process of de-industrialization is not new, at least not in the U.S. where goods-producing jobs have fallen steadily over the last 60 years, from 40% to 13.8% of total non-farm payrolls.  As a direct consequence (in my opinion) wage and salary income has dropped from 68% of total personal income to just a little over 50% (see chart below).

Consequently, total debt soared to 550% of earned income - even excluding debt of the financial sector (see chart below).

Can The Real Economy Sustain This Debt?

This chart raises one very important question: can the real American (and Western) economy sustain its debt load, or will it collapse under it? To put it another way: Is there life after debt?

The answer to this question involves much more than quantitative easing, classical econometric ratios, or Tea Party dogma.  We must go straight to the heart of the global " Permagrowth" economic paradigm, the one we have been using and abusing for well over a century.  In this outdated and obviously crumbling model, debt and growth are intrinsically linked, one becoming the enabler for the other in a sort of pushme-pullyou perpetual motion machine.

But it can't go on. Debt is a call on tomorrow's growth - and if such growth is impossible then the debt becomes untenable. The Earth's diminishing resources, benign climate included, can no longer sustain Permagrowth, therefore we cannot repay or even adequately service the immense debt/credit loads we have created.

Yes, there is life after debt.  But it will be very different from the consumerist Shangri La we had become used to.  I believe we are headed towards a low-intensity, decentralized type of macro-economic paradigm where energy and most consumer goods are produced locally from renewable sources, and where the sociopolitical system is likewise decentralized.

The important question is this: can such a paradigm shift be accomplished relatively smoothly and peacefully, or will it take a major upheaval? I really don't know..

P.S. On the eurozone: Dear Mrs. Merkel (or is it Ms.?), when your entire neighborhood is on fire it is not a good time to argue the bad structure and poor management practices of the Fire Department.  Rather, please make sure the firemen have plenty of water and leak-proof hoses.
Posted by Hellasious at Thursday, November 17, 2011 18 comments: