Following yesterday's abysmal results for Merkel's CDU in the regional Hesse elections (down 11% from previous polls) she is said to have declared her decision not to seek re-election as her party's leader in its upcoming congress.

Austerity and fiscal propriety are eroding fast, the Greens and AfD are big winners.

and PS Bolsonaro won in Brazil.  Reactionary Populism is gaining all over the world... (sigh).
Posted by Hellasious at Monday, October 29, 2018 3 comments:

Italy - The Rise Of (Fiscal) Populism

Bond and equity markets do not react well to overt signs of fiscal populism.  Case in point: Italy. 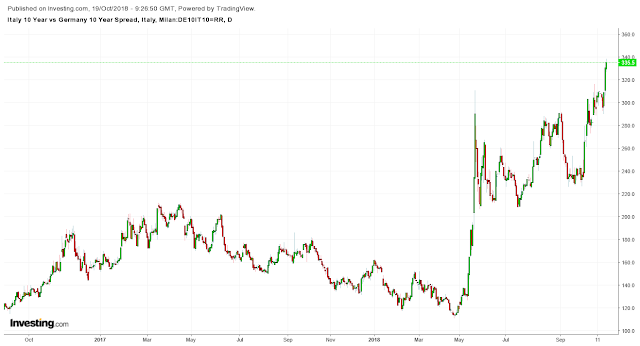 The Italian government submitted its 2019 budget plan to the EU calling for a large deficit, unacceptable to the Commission.  A spat has ensued, causing bond yields to rise sharply.

Unlike the Greek "tragedy" of the last 10 (!) years, Italy is a very, very large economy and cannot the pushed aside and/or be blackmailed into submission.  A dogfight will eventually lead to tearing apart the entire EU structure, so an easing of the "German" fiscal probity model is likely in the cards, also given that Mrs. Merkel is now weaker than ever politically.
Posted by Hellasious at Friday, October 19, 2018 No comments: