Russia’s invasion of Ukraine is the first salvo of a New Cold War. It is Russia’s direct challenge against the global preeminence of the US and, one way or another, it is joined by China.

Western economies are based, almost 100%, on consumer spending. But the New Cold War will immediately require massively increased government spending on everything from personnel and armaments to spy satellites and foreign aid.  Meaning: sharply higher taxes and sharply lower private spending.

Do the math for corporate earnings, multiples, and share prices.

My current working model for financial markets is this:

Can't see how shares and every other Risk-On asset (eg junk bonds) will do well in this environment, no matter what happens with Russia/Ukraine/China (this is a subject for another post).
Posted by Hellasious at Monday, February 14, 2022 1 comment:

Anyone Wondering Why Inflation Is At 40 Year High? Duh…

Just one chart in re the post’s title… Milton Friedman is shaking his head. 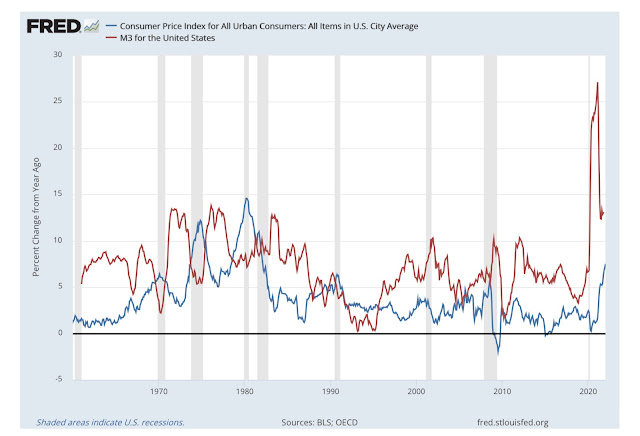