I have often remarked that I am on the deflation side of the inflation-deflation debate. Here is one more argument in support of this thesis:
So-called "innovative" finance monetized real estate and corporate assets that where hitherto immune from being turned into money equivalents. This was done via an array of asset-backed securities and derivatives which often went all the way to the fourth order. Starting from plain vanilla mortgage, consumer and corporate loans (i.e. funded debt), the investment bank factories synthesized a whole array of artificial goods, ultimately far removed from the income streams of the underlying assets:
... and more...

The alphabet soup seems thick and opaque, but don't let the jargon confuse you. Here is the crucial point: almost all of these "securities" were unfunded debt, i.e. money equivalents created from thin air. All they did was to generate more and more "buying power" to boost asset prices higher, from houses in the Inland Empire of California to share prices in New York, London and Shanghai. In case it is still unclear: it was margin debt.

If you are familiar with buying stocks or commodities on margin, you can immediately appreciate what went on, and why all current attempts to avert a wider crisis will fail miserably for as long as the focus is on the symptoms, instead of the underlying illness. Margin debt cannot be "restructured" with falling asset prices. Period.

Depending on the leverage used, this debt is now worth anything from zero to a deep discount from face value. And that's where it is trading at, when it trades at all in the secondary market. All those trying to hide the balance sheet reality behind plywood and canvas should be recognized for what they are: Potemkin village builders.

This artificial money is now being removed, destroyed by dropping asset prices. How much of this "margin money" was created, in the first place? In a word, lots. In the end of 2007, financial sector debt amounted to 110% of US GDP, or $15.4 trillion. It was 63% just ten years ago (see chart below, click to enlarge).

Financial and Non-Financial Debt as Percentage of GDP Data: FRB
Allora.. finalmente, it is only fitting that this is happening during Carnevale. The clueless may still be dancing Un Ballo In Maschera, but I already see the elaborate Venetian masks coming off and "Miss Lovely Liquidity" being revealed for who she really is: "Madam Ugly Debt". 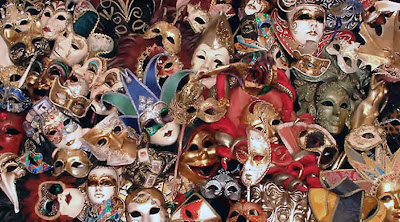