The world's central banks and the US government are trying to engage in closely coordinated financial salvage operations in order to create as much psychological market punch as possible. In effect, they (well,ultimately we) are assuming worthless debt to keep the lend-spend system going for a while longer. By doing so they are just swabbing iodine onto a gangrenous limb, instead of doing what is really necessary: massive doses of antibiotics and/or outright amputation.
The problem is quite simple, all over the West: there is too little earned income at the foundation of the economy to support massive debt and thus overinflated asset prices. Looking at American households alone, in 1978 their total debt came to 79% of total employee compensation (wages, salaries, pension contributions, etc.). Today, this figure has more than doubled to 174%. 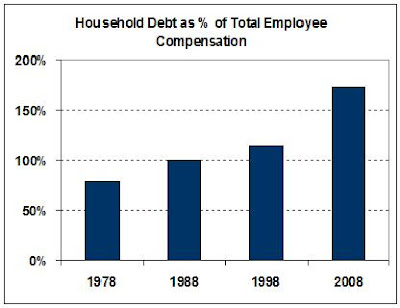 By their current actions the authorities are attempting to prevent the inevitable, logical and even healthy process of debt elimination and asset price correction that would restore some semblance of balance between debt and income.

Let's say it once more: let the market take care of prices and instead concentrate policies on boosting earned income, i.e. create well-paying jobs. The rest is fluff.
Posted by Hellasious at Friday, September 19, 2008