The End Of The Debt - Asset Economy

Start with a few simple truths:
Therefore...
Let's look at what happened in the US in the last few years. One chart says it all: 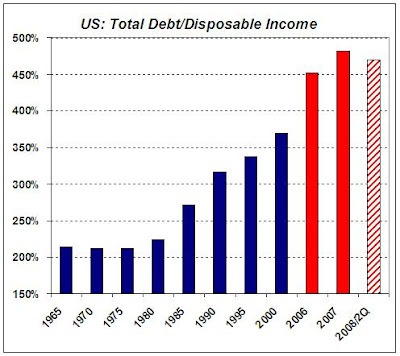 Therefore, re-capitalizing banks, brokers, pawn shops, French bakeries or nail salons by issuing huge amounts of even more debt is simply not going to work. In fact, it will make matters worse when the whole thing inevitably comes crashing down.

Corollary: the only way to "save" an economy that relies on a self-destructive, vicious cycle of borrow-inflate-spend-borrow is to chuck it and replace it with a new macro-economic model. Period.
_______________________________
P.S. If you want to find out the differences (and some similarities) between today's situation and 1929, this is the best book about the Crash, by far: The Great Crash 1929 by John Kenneth Galbraith

Posted by Hellasious at Wednesday, October 15, 2008