Can the US Do An IMF On Itself?

In previous years and decades whenever a third world country would get into financial difficulty it would turn to the IMF for a bailout. Because of the way the global financial system was structured in the post-Bretton Woods era (World Bank, IMF, WTO, etc.), the US was always in the forefront of such efforts. The bailout examples are numerous and well known: Latin America, Mexico, Asia, Russia. By and large the process worked pretty well, based on the premise that in an interconnected world if your neighbor's house is on fire you don't haggle about the garden hose.
Let's explore this fire simile a bit further.

Picture the US as the Global Fire Department (GFD). In the last ten years or so the GFD became extremely irresponsible. It ignored the fire safety of its own firehouse, which became choked with highly flammable material (i.e. debt and derivatives), and relaxed the rules about the health and fitness of its firemen (i.e. oversight and regulation were weakened).

Seeing this, the good citizens in the neighborhood (i.e. other western nations) also adopted the same attitude. And why not? If the fire department itself didn't care about all that dead wood and turpentine piling up in its own back yard, why should they? A whole raft of nations from the UK and Australia, to Bulgaria, Poland, Iceland and Romania bought the same highly flammable "growth" model. Borrow - spend - inflate assets - borrow.

It was only a matter of time until a fire started somewhere. Unfortunately, it started in the worst possible place: the GFD firehouse itself. Predictably, the unfit firemen could not contain it and the fire quickly spread to the rest of the town. So, who's going to put it out now and how?

The current plan is to take all that dry firewood and turpentine and stow it someplace else: to replace and guarantee private debt, plus issue additional government debt. But with the entire town now threatened by the blaze, that's just a delaying tactic. What we need is less wood and less turpentine, plus more, better and smarter firemen. And even that's not enough. The entire town should get together to fight this fire before it scorches everything in its path.

Previous IMF bailouts transferred some of the risk from, say, Mexico or Argentina to the IMF (essentially, the US) by providing fresh loans and guarantees. By current standards, the sums involved were tiny: $20-50 billion.

But the US cannot perform a similar IMF bailout on itself, as it is currently attempting to do. The United States IS the IMF. Astronomical guarantees and bad-asset purchases merely transfer and spread out the problem internally, instead of solving it. There is simply way too much debt; too much dead wood, too much turpentine and, naturally, no one else wants it in his back yard. Just think of China, Japan, the Gulf States or Russia and how much US debt they have already piled up. How much more "firehouse debt" are they willing to accept, particularly when the flames are already licking their own houses? 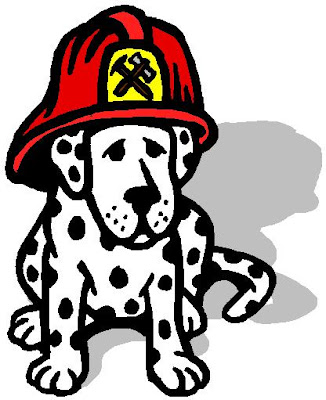 Can Old Dogs Learn New Tricks?
President-elect Obama is currently hiring firemen, his economic policy team; and it doesn't look good. They are the exact same bunch that let the firehouse get full of tinder in the past, if they didn't necessarily also strike the match. I sincerely hope they can teach new tricks to old dogs - but does Larry (Summers) look trainable to you? Woof.

Final thought (and Happy Thanksgiving to all): Turkeys destined to become roasters think they live in gobble heaven, right up to the point they turn into Butterballs. We got to change the way we look at things folks, and the past isn't necessarily the best guide to the future.
Posted by Hellasious at Wednesday, November 26, 2008