Facts and Figures, Whys and Means

Fact 1: There is too much debt in the economy to be properly serviced by the earned income generated. Total debt has doubled as a percentage of disposable income in the past 25 years. 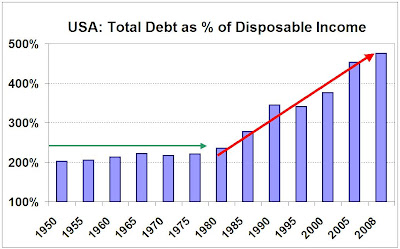 Figure 1
Why did it happen? Because wages and salaries (i.e. earned income) were kept artificially low in the name of "competitiveness", while consumption was boosted through ever increasing debt.

What does it mean? Assuming even more debt and/or replacing private debt with public, as is currently happening, cannot resolve this fundamental problem. Instead, debt must be liquidated.

Fact 2: Saving has disappeared in the US. Every penny earned is consumed. 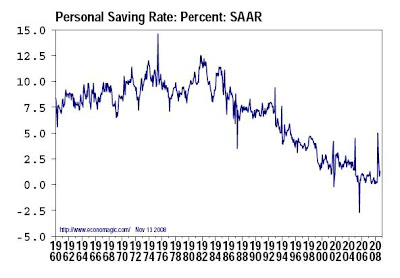 Figure 2
Why did it happen? The stagnation of real wages and salaries meant that less income could be saved and had to be consumed to maintain the American Lifestyle. In addition, way too much social emphasis was placed on consuming vs. producing.

What does it mean? The US economy cannot finance itself internally and has to rely on foreign investors and lenders. Unless reversed, this trend spells big trouble geopolitically.

Fact 3: There was wholesale removal of manufacturing from the economic base after 2000 (aka China's "miracle"). Millions of well paid jobs were replaced by service sector jobs, many in the very low-pay area of leisure and hospitality (waiters, chambermaids, etc.). 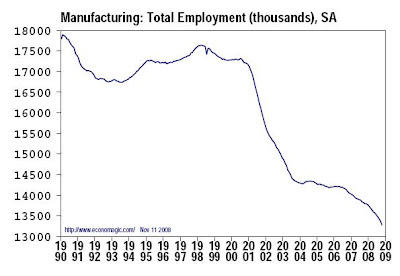 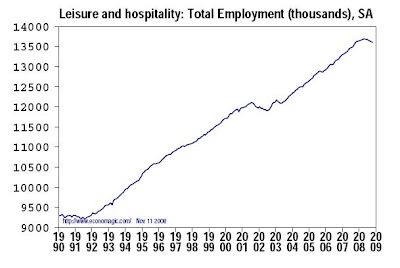 Figures 3 and 3a
Why did it happen? Because neo-liberal and neo-con policy makers made a conscious decision to replace manufacturing with its pesky labor unions and associated politically troublesome middle class, with an indentured social class of dependent service workers. All in the name of "free" markets, of course.

What does it mean? The imminent end of the US as a superpower. Supercomputers and fuel cells are not developed by a java-and-jelly donut economy. Globalization means that education, knowledge and technology are, in fact, fungible and transferable. In the absence of a local base of utilization high value-added jobs are free to go where they please.

Conclusions
a) Debt must be liquidated and earned income increased.
b) Saving must be increased by reducing consumption in order to fund investment (preferably in energy infrastructure) and to reverse the loss of geopolitical importance.
c) Manufacturing must be emphasized in order to regain technological leadership.

Posted by Hellasious at Wednesday, November 12, 2008