I am reading a rather excellent book right now, Niall Ferguson's The Ascent of Money: A Financial History of the World. (See "FEATURED RECOMMENDATIONS" on the right.) Following is a brief excerpt relevant to today's post, about the connection between precious metals and money in the Victorian era.
"Precious metals alone are money," declared one City grandee, Baron Overstone. "Paper notes are money because they are representative of Metallic Money. Unless so, they are false and spurious pretenders. One depositor can get metal, but all cannot, therefore deposits are not money." Had that principle been adhered to, and had the money supply of the British economy genuinely hinged on the quantity of gold coin and bullion in the Bank of England's reserve, the growth of the UK economy would have been altogether choked off, even allowing for the expansionary effects of new gold discoveries in the nineteenth century.

The above passage is not intended as music for the ears of monetary goldbugs, also known as moldbugs. Rather, it highlights the direct connection between money supply and economic "growth": the two are directly and proportionately related. (I am using quotation marks to highlight the difference between quantitative and qualitative aspects of economic activity.)

It is, therefore, a given that in order to rapidly establish a Sustainable Economy we have to radically transform our present monetary system which is geared exclusively towards the ever-expansionary Permagrowth Economy. This is crucial: no matter how many wind turbines we install and how much organic food we eat, we must also design and install the proper monetary apparatus if sustainability is to work.

Let's begin with what is going on right now in response to the credit crisis. Monetary authorities and politicians are working up a lather, pumping as much fresh state-sponsored liquidity into a rapidly draining cesspool of private debt gone horribly bad. They are doing so because they cannot for a moment imagine a non-inflationary world of falling and ultimately stable prices caused by a zero growth economy. To them, schooled as they are in "modern" academic economics, such a development would be an abomination; and even talking about it would be equivalent to heresy punishable by burning at the stake.

Their actions are entirely wrong and counter to our best interests - at least the "other" 99.9% of us that do not qualify as yacht-haves. Just like the Spanish Inquisition, they are unlikely to go down in history as enlightened financial progressives, despite the thin veil of populist Keynesianism with which they are attempting to cover the absence of originality in their thinking.

Attempting to salvage a corrupted, unsustainable financial edifice by issuing trillions of dollars in newly minted IOUs carrying the blessing of the state reminds me of the infamous Catholic indulgences, the written pardons marketed in the thousands by some Popes to raise money for the Vatican. They even had a jingle: "As soon as a coin in the coffer rings, a soul from purgatory springs". Well, we know how all that ended.. 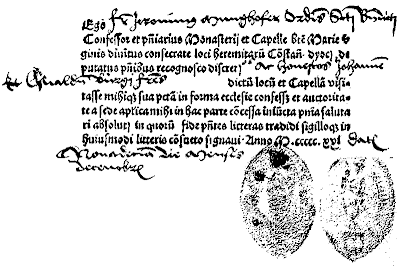 Absolution from sins, circa 1521

Carrying the theological parallel a bit further, I should point out that our present monetary system is based solely on faith. After all, the word "credit" derives from credo, i.e. faith. When those responsible for acting in the most moral and responsible manner possible, instead debase our trust (fides, and thus fidelity) why do they expect us to believe?

I will not be surprised at all to see a modern-day Martin Luther posting his Theses on some central bank's doors one of these days.