It was decades ago, I was young and I was on vacation in Honolulu, Hawaii. Jimmy Buffet was appearing live at an outdoor stage someplace in Waikiki Beach, singing "Cheeseburger in Paradise".
Fast forward to today. Speaking in the 128th Assembly for Bank Directors Janet Yellen, president of the San Francisco Fed, said that many of the economy's current dynamics are similar to the Great Depression, requiring "urgent, aggressive action". Furthermore, "the economy is in the midst of a downward spiral, and that calls for strong policy responses".

Given the current reduced state of banks all over the nation and massive bailouts in the trillions, one would expect the meeting to be held at the Chicago airport Ramada Inn. Cookies and weak coffee free, anything else you have to pay out of your pocket.

Welcome to the Kohala Coast on the Big Island of Hawaii... 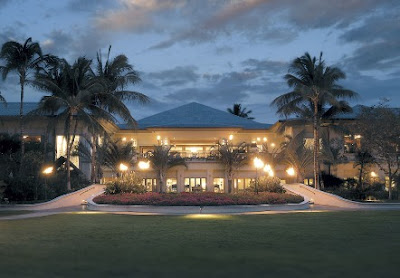 The Fairmont Orchid is the site of the 128th Assembly for Bank Directors, February 5-8, 2009. The Fairmont is set on 32 acres with a white sandy lagoon and aquamarine waters, five restaurants, and the largest petroglyph field in the Pacific.

Ocean view rooms start at $424/nite. But, hey! They can afford it - they have a really rich Uncle.

Those guys are incredible...
Posted by Hellasious at Saturday, February 07, 2009