SNAP is the brand-new acronym for the old US Food Stamp program; it stands for Supplemental Nutrition Assistance Program. I guess "food stamps" was too old fashioned and, well, kinda depressing - as in "the greatest economic crisis since the Great Depression".
Call it what you may, as of November 2008 (latest data available), the number of Americans needing help with the most basic requirement of life, to wit eating, jumped 14% from the same month last year. 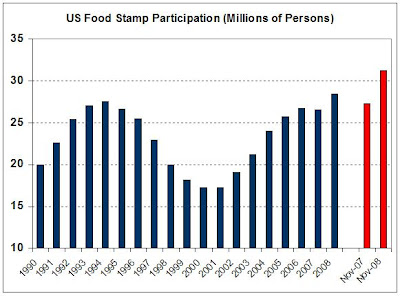 Data: USDA
If you look at the data going back to 1969 you will see a definite correlation between food assistance and the economy: recessions result in higher participation and booms in less. For example, the 1991-93 period saw 30% more people receiving benefits, while during 1994-2000 participation dropped back sharply as the economy expanded.

What is most interesting, then, is that despite the supposed economic expansion after 2003 more and more people needed to go on food stamps. As of November 2008 their number was at an all time record 31.1 million - a number that has since certainly gone higher with increased unemployment.
Posted by Hellasious at Monday, February 02, 2009