If the global economy has become highly integrated, as so many say ("globalization"), isn't it illogical that parts of it will decouple by a wide margin and just keep going strong, despite weakness in the US, EU and Japan (70% of global nominal GDP)?

The reason for the question was the hyping of "decoupling" by a bunch of talking-head econo-analysts as the way forward for the global economy.

Chinese exports contracted by 17.5% in January, the steepest in 13 years, and the third month of contraction. Imports contracted even more (43.1%, the worst since data begun being collected in 1995). Full details here.

Instead of decoupling some of its newer cars, the global economy train has derailed in toto. And it really doesn't look very good going forward, either; inventory-to-sales ratios in the US are zooming higher. Remember that the US and Europe account for 50% of Chinese exports. 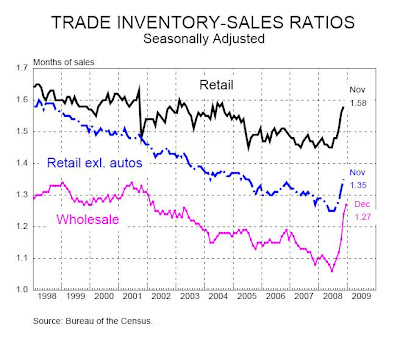 Posted by Hellasious at Wednesday, February 11, 2009