Today, a "plug" for an excellent book written by an author who not only knows his financial history, he's a practising money man, too.
"Lords of Finance - The Bankers Who Broke The World" by Liaquat Ahamed. See the "Featured Book" Amazon button on the right or click on the link above.

Mr. Ahamed tells the story of the world's most powerful central bankers as they struggled to re-establish a Victorian financial ethos in a world forever changed by the Great War: Montagu Norman of Bank of England, Benjamin Strong of the NY Fed, Hjalmar Schacht of Reichsbank and Emile Moreau of Banque de France. Their short-sighted decision to re-impose the inflexible gold standard and its arcane foreign exchange and monetary policy mechanisms (which were previously abandoned during WWI) proved ruinous and ultimately precipitated the Great Depression.

The gold standard's role in the worldwide depression of the 1930s has been probed before, notably in Barry J. Eichengreen's scholarly "Golden Fetters" (1992). But Ahamed -- a hedge fund adviser, a World Bank veteran and a supple writer -- personalizes the story, exploring how insular relationships led to bad choices. Strong and Norman, for instance, became friends and gained each other's trust through lengthy correspondence. Strong used his influence to secure a loan for England, then prodded Norman to put England back on the gold standard. Norman, in turn, persuaded Strong to push down U.S. interest rates, helping to create the stock bubble that eventually burst in October 1929. When Strong died in 1928, his replacement became Norman's thrall and fell in lock-step with the emphasis on gold, extending the economic agony.

The purpose for bringing this up in today's blog is not out of intellectual curiosity for the financial history of a bygone era. Rather, it is to make clear that insistence on old dogma is highly destructive in the face of new economic realities. And in this context The Lords of Finance has a very important message for all of us, right now.

No, we are not threatened with going back to "that barbarous relic", as Keynes called the gold standard in 1924. Instead, our era's rapidly ossifying dogma is Permagrowth: the idea that we need to constantly grow our economies and fight GDP recessions with all tools at our disposal, fiscal and monetary. In my opinion, Permagrowth has "outgrown" its use and become but a relic of post-WWII groupthink, itself based on the erroneous application of Keynes' ideas.

Such dated orthodoxy is completely ineffective - probably even dangerous - in a world confronting challenges that could not be foreseen in 1944, when Permagrowth became the official religion during the Bretton Woods meeting. Climate change, habitat destruction and resource depletion were not on the radar screen then, not even as distant blips. But they certainly loom large now and demand our immediate attention.

Therefore, instead of futilely attempting to preserve the ancien regime, we should strive to develop a new global economic paradigm and the proper monetary model to fit with it.

This does not mean that we should plot a course that strives for maximum gain, even at the cost of maximum pain, as some suggest. This is not only unacceptable from a purely humanitarian viewpoint it is also impossible in today's modern democracies; voters will simply not stand for it. In any case, I am certain that the transition from Permagrowth to Sustainability can be accomplished without the inevitable social upheaval and massive degradation of living standards that is envisioned by some popular tent-revivalist doomers.

In fact, I strongly believe that the process of transition can serve as a secure foundation of continuous economic development for many decades to come (notice the absence of the word "growth"), replacing the current debt/asset/consumption vicious cycle.

What's my two cents worth of a contribution?

There is a missing link between the new Green Sustainability economic paradigm and the old monetary system, i.e. we cannot apply a new economic paradigm using an old money system. This is where my Greenback proposal comes in, a new way of creating "money" but one that is completely familiar and easy to implement for everyone involved, from consumers and businesses to financiers, central bankers and politicians. Even the day-to-day monetary policy tools are kept the same, though they have not been heavily used in some 25 years: direct targeting and control of money supply via open market operations.

Throughout my career I have had several magazine front covers framed. One is from BusinessWeek and shows a smiling cow jumping over the moon - naturally, it's about the stockmarket and is dated a few months before the 1987 Crash. Another comes from TIME and has the simple words "THE CRASH" in black, dated November 1987. Naturally, these two hang side by side.

And now, I think I have another addition for my collection. From the ever so subtle and tactful NY Post, comes today's "let's slam the barn doors shut after the (fat) cows have left" rage. We have our convenient scapegoat and we're going to milk her for all she's got - and then some. 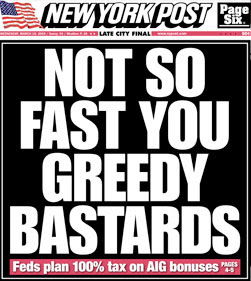 Question: where was the mainstream press when the real looting was taking place?
Posted by Hellasious at Wednesday, March 18, 2009