Neo At The Quantum Casino - Part I

One morning, young Neo Phyte woke up early. Feeling particularly frisky - and by his own admission in constant need of ready cash - he decided to try his luck at one of the gaming parlours that were recently opening up fast and furious in his town.
As he strolled down the street where most of them were located, he noticed for the first time that they all bore the same name: Quantum Casino. He puzzled about this momentarily but then quickly walked into one of the establishments, at random. He did need a new iPod rather desperately. But he little knew that his seemingly random choice was a harbinger of things to come.

Neo walked right past the loud cacophony of the one-armed bandits by the entrance. He was looking for what all the "How To" books claimed to be the best bang for his buck: craps. Players with proper understanding of the game and a quick head for odds stood a better chance there than, say, at the roulette wheel. Theoretically, anyway.

It didn't take him long to find some craps tables bunched together, though only a couple of them had lots of excited people around them with the rest standing almost empty. Neo thought he knew about this too: only a few tables were "hot" at any given time, and thus attractive for experienced gamblers, while the rest were "cold" and should be given a wide berth.

Elbowing through the crowd at the edge of the first hot table, Neo chanced a look at the croupier. She was a tall and attractive blonde, her tag curiously identifying her as GOD. But he had little time to think about it because right then, at the other end of the table, a man shook furiously, yelled "baby needs new shoes" and threw the dice in his general direction.

The red translucent dice rolled and gamboled on the green felt, turning this way and that in a constant whirl of forward motion. They raced to the wall of the table, bounced off and started to slow down, getting ready to settle on the faces which would determine the throw. Neo locked on them with his eyes, unconsciously trying to establish their final outcome but, naturally, found the motion too fast for the capacity of his optic nerves.

But even when the dice stopped completely, Neo could not immediately read them properly - they were still quite blurry. The effect lasted only a split second; the beautiful croupier announced "Lucky Seven" in her sonorous voice and the pair instantly resolved into a sharply defined three and four. The same thing happened again and again - Neo's focus remained just a tiny bit soft until she called the shots, whereupon the dice immediately snapped to high definition and the appropriate number combination. 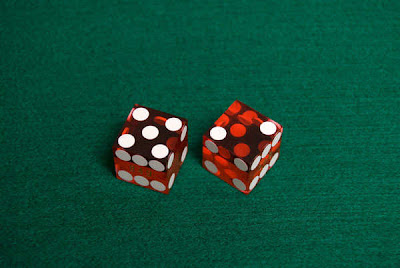 Come Seven
The crowd roared with appreciation as a long string of sevens came in and brought large gains for the players. The table went from hot to scalding, and "baby" went from needing shoes to thirsting for sable coats and multi-carat rings. But just as the really big stakes were dreamily plopped down in anticipation of luxury yachts and Mediterranean vacation villas, the dice started resolving into ugly snake eyes and boxcars.

The table went cold quicker than a stand-up comedy club after the third bad joke in a row. Neo had not bet a dime - he was too bothered by his alternating blurry-sharp vision and the effect of the croupier's voice on the outcome of the dice. As the players quickly deserted the table with their wallets considerably thinner for their efforts, Neo saw the blonde croupier also leaving her post.

She headed for one of the service doors leading to the casino's backstage. Neo followed her and also went through, just one step behind. He tapped her lightly on the shoulder and she turned, smiling brightly. Before he could say a word, she spoke softly: "Follow me, please" she said and continued walking.

They moved silently down linoleum corridors illuminated in stark greenish fluorescent light, finally coming to a stop before a plain white door. The cheap plastic imitation brass plaque simply announced "Manager" and the croupier opened it without knocking first. "Fred, here's the Joe you saw on the closed circuit. I'm going on my coffee break now." She turned and started to leave but she stopped short, facing Neo. "Sorry about the Joe bit - what's your real name?"

"Ahh, it's Neo - but I couldn't help noticing that your own name is highly peculiar. I mean, what kind of weird name is GOD?" he asked.

"Well, Neo, it's nice to make your acquaintance. Speak to Fred here and he'll explain everything. I have only ten minutes for my break so I have to run now, but we'll be in touch, I'm sure". She gave him another of her dazzling smiles and walked off.

Neo looked inside at the sparsely furnished office. There was a man in a crumpled suit sitting behind an empty desk, his face lit by the ghostly light of monitors covering one entire wall. As Neo walked in, he rose to his feet and motioned him to a chair. "Please sit down, Neo is it? My name is Fred and I am the Manager of this Casino. Can I get you some coffee - or tea perhaps? It's still early and our chef does a great cheese danish, too, if you haven't had breakfast. I had a couple myself already, but I'll join you."

"No thanks, I'm not really hungry - but I'll have a double cappuccino if it's all right with you" said Neo as he sat down. After Fred had called for the coffee, Neo continued. "Say, what's this all about? You guys have a thing with names? Firstly, why are all the Casinos in this town named Quantum? And what's with GOD on her tag, anyway?" asked Neo, pointing with his thumb at the door.

"You noticed 'Quantum', eh?" chuckled Fred good-naturedly. "Very few actually do - almost everybody just sees 'Casino' and that says alot about people, doesn't it?" He waited for an answer, but Neo just bided his time quietly.

"Oh well, I guess I should also explain GOD" said Fred and opened his desk. He drew out a laminated card identical to the one worn by the croupier and put it on his desk. "How much do you know about quantum physics Neo? Schrodinger's cat, the bit about Einstein, God and dice - does it ring a bell? Look here" he said and offered the card, without waiting for the answer.

Neo reached over and picked it up, ignoring the question. Under "Quantum Casinos" and "Welcome My Name Is" in calligraphic script was printed "GOD" in large, spaced black bold letters. The card also bore a photograph, a bar code and some other numbers, all having to do with another employee, he assumed. "So what? Are all your employees named GOD? I don't get it".

It was then that Neo saw the small lettering next to each capital.

God is Only a Dealer
"Yes, Neo. Albert Einstein was completely wrong. Not only does God play dice, he's also calling the shots".