The Greek letter gamma (γ) is used in finance to denote correlation, the "connectedness" of two separate events. For example, if patient A dies of malaria, how likely is it that patient B will, too? If it is absolutely certain that he will, correlation is total and γ has a value of +1. If it is certain that he will not, then the two events are completely uncorrelated and γ has a value of -1.
Assigning proper correlation values is crucial in the design of tranched derivative products that contain many separate instruments. For example, CDOs structured from thousands of individual home mortgages, auto or student loans.

It did not take Neo very long to become adept at dealing craps the Quantum Casino way. All he had to do was call the shots - just a split second before every gambler at his table had a chance to "see" how the dice lay. Neo's manipulation of perception created reality as he - and the Casino owners - wished it to be.

And in the Quantum Casino's version of reality almost every gambler got properly "skinned" the old-fashioned way: by regular and frequent swaps between greed and gloom. 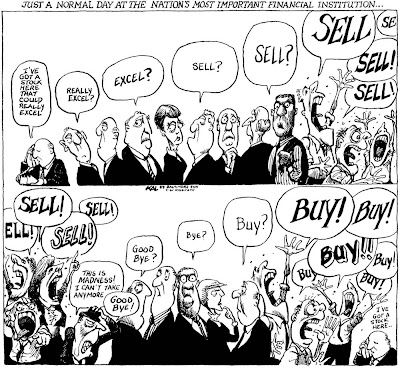 Cartoon by KAL
Not content with swindling the same old geezers, Neo soon tired of the regular games and looked for added excitement. He designed a brand new game employing multiple variables that provided small, but regular, payoffs every time the variables did not align together - which was most of the time. But when they did converge everyone lost big, including their prior winnings. He called it The Correlation Game - and it proved to be a bonanza.

Neo realized that people loved repetition of familiar patterns - the herd mentality, he called it - and supplied it with gusto. He skillfully manipulated results and repeated gains to create a seemingly simple and profitable pattern - until he led everyone right over the edge, of course.

Not long thereafter, and based on the tremendous profits his new game racked up for Quantum Casinos, Inc., Neo was made a partner. His future was set.

A few - very few - professionals have tried to explain how they "see" markets but their work is usually ignored or scorned by the "reality-based" community of professors, analysts and consultants who prefer deterministic theories, such as random portfolio, etc.
Here are two examples of really smart guys that "got it":
Needless to say, both individuals were extremely successful. In addition, Soros' premier hedge fund is named The Quantum Fund. A coincidence?
I will say it again: it is perception that shapes reality and not the other way around. Does this apply to today's crisis? Yes, it does. If we believe that "this is the biggest crisis since the Great Depression", then our belief will be realized because our behaviour will be altered to fit our preconception.

Yes, she's back. Who? Goldman's strategist Abby Joseph Cohen has just said that US banks are "still not in the clear".

She is one of the best contrary indicators in the strategist camp. Back in 2000-01 I made a point of shorting every time she came out with a bullish hoo-hah. I think she stayed bullish until 2003 and then turned bear. Just in time."

Well, I bet she's still the best contrary indicator around - and fervently hope Goldie keeps her on the payroll forever. And ever.
Posted by Hellasious at Tuesday, March 31, 2009