Banks are most definitely "it" in the stock market these days. Bloodbath is too modest a description for what happened to their shares in just 18 months: at its low last Friday the KBW index of US banks (symbol: BKX) was down a massive 85% from the high reached in mid-2007 (see chart below, click to enlarge).

KBW Index of US Bank Stocks

In almost every sense, the market has already discounted a 1930's type depression for the finance industry. For some financial institutions this is entirely just and rational. Given the ridiculous risks they took in lending and the massive leverage in their balance sheets (40x was not unusual), one did not have to be a prophet to predict the outcome. The government swooped in and took them over, effectively wiping out their shareholders (note: it may now be the turn of their bondholders to also get a severe haircut).

In the age of Prof. Bernanke's Flying Fiat Circus no financial edifice is to go down in flames if it poses a threat to its neighbours - period. (Is this the regulatory equivalent of the neutron bomb - kill the shareholders, save the structure?)

But what about those banks that are somewhat better positioned, being a bit further in from the edge of the precipice? The ones that didn't dive headlong into the NINJA/CDO/CLO/SIV/CPDO smorgasbord buffet? What are their prospects?

Yesterday I talked with a banker friend who works on the trading side and asked him his opinion on bank stocks. He was very sanguine: this is a balance sheet crisis, he said. It will take time and pain for banks to work down from 40-times leverage to around 10-times on their own - if ever. The "if ever" was a clear reference to the risk of a government takeover - a very real risk, as we well know.

And yet, as with any business, there are two elements to a bank's accounts: balance sheet and income statement. We are currently focusing very sharply on balance sheets, i.e. examining assets to judge if their current and potential toxicity is poisonous enough to knock banks out for good. But what about income statements?

Banks are pretty simple businesses: what they charge for loans minus what they pay for funds and expenses is their net interest margin (NIM) and it ought to be significantly higher than losses sustained from the loan portfolio. There are other sources of income, such as fees and prop trading, but the heart of a bank beats at its NIM.

So, let's look at margins; below are charts that attempt to provide a current picture.

First, the prime rate, the yield on BAA corporate bonds and the 30 year conventional mortgage rate minus one month AA financial commercial paper (click to enlarge). After a brief period of volatility late last year, margins are healthy once again - even "too" healthy if we judge by the BAA spread. This means that banks are making good money from performing loans. 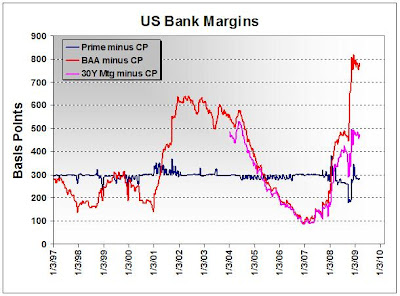 Data: FRB St. Louis
Each bank's gross interest margin spread will be some combination of the above, given its particular mix of corporate, consumer and mortgage lending plus exposure to the yield curve (borrow short - lend long).

Another factor is how long will the Fed be willing to keep short-term rates at current historicaly low levels. With Fed funds at 0.20% and the various FRB "windows" wide open, banks can fund themselves at extremely low cost against all kinds of collateral. That's another "plus" for bank income statements - a rather big "plus", to put it mildly. 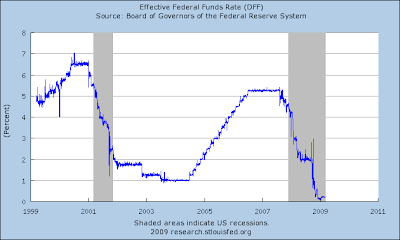 Chart: FRB St. Louis
Bottom line? There's a race going on at Havoc House Bank. On one side of the account ledger the Bad Loan Demolition Squad is tearing down the balance sheet, whereas on the other side the Wide Margins Repair Team is furiously trying to patch things up through the income statement.

Who will prevail? There are a couple trillion dollars (at least) riding on the outcome and we all have wager slips on our hands, want them or not. But this is not really a fair race, if you think about it. The bookie is in on the "fix" and he's not going to let his chosen team lose - unless he runs out of time, of course.
Posted by Hellasious at Friday, March 13, 2009