From: Ben S. Bernanke, Chairman, Board of Governors of the Federal Reserve

To Whom It May Concern

Let me start by pointing out that my name is Ben, not Bagehot and that this is the 21st century, not the 19th. For those not familiar with said gentleman's monetary policy admonitions, allow me a brief quote offered in his opus "Lombard Street":

"We must keep a great store of ready money always available, and advance out of it very freely in periods of panic, and in times of incipient alarm. Any notion that money is not to be had, or that it may not be had at any price, only raises alarm to panic and enhances panic to madness."

You may be puzzled; after all, the Federal Reserve under my leadership has cut rates to zero and is constantly providing lakefuls of "ready money". So what is the difference between myself and Bagehot, you ask?

Simply this: while Bagehot advised lending freely and copiously during financial crises, he did so with the proviso that money should be directed only to temporarily illiquid institutions and under no circumstances to terminally insolvent ones, which should be allowed to fail, instead.

Well, ladies and gentlemen, let me assure you: I'm no Bagehot!

Thus, though I do rule money by near-absolute monarch fiat, I am not beholden to any notion of bygone Victorian monetary rectitude, such as the gold standard. My motto is Let No One Fail For Want of Bail. It is really a shame the government won't allow me to inscribe this above the entrance of the Federal Reserve Building in D.C., so I guess The Bernanke Exit must suffice - for now. 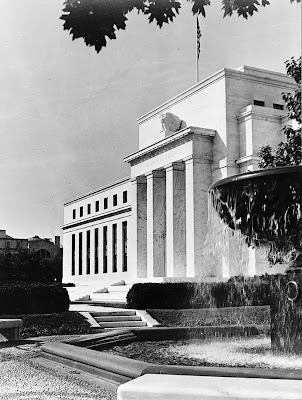 The Federal Reserve Building, Washington D.C.
In case you have not noticed (read my official biography), I grew up during the 1970's, a period of Keynesian economic theory apotheosis around the world. Even if a halo of Austrian neo-classicism may be discerned around me, what really matters right now is that I am a fully certified pilot of moneycopters (instrument rating). Such a development not even a genius of Bagehot's calibre could have predicted two centuries ago, let alone lesser lights today (I shan't mention names but you know who you are).

Therefore, let this missive act as a warning to all shorts, plungers, goldbubs, deflationists, doomers and acolytes of Wall Street declasse riffraf: I shall use all powers vested in me to smite you down. As for my erstwhile collegiate colleague from NYU, him of newfound fame and acclaim, I reserve a special bon mot from the 1975 rejoinder of President Ford to Mayor Beame of New York City: drop dead.

And perhaps not unrelated to the above discarded memo (Taylor rule and all that), yesterday came news that continued claims for unemployment insurance reached a record 5.47 million, though not nearly as high as levels reached in the '70s and '80s when measured as a percentage of the labor force. 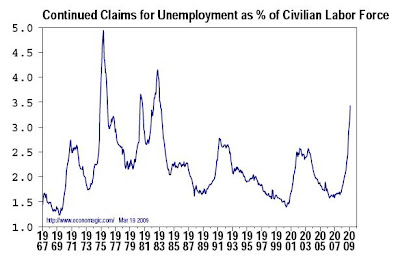