Recently Chairman Ben said he was seeing "green shoots" in the US economy. I immediately thought of Lynne Truss's wonderful book "Eats, Shoots & Leaves" and, thus, the title for today's post.
To wit, for several weeks now my thesis on the global economy has been as follows:

BKX and SPX Comparative Chart
If we don't immediately refocus our efforts to the REAL economy by working towards the creation of a sustainable future, then all we're going to achieve with the current massive bailouts is what is implied in the post's title: A bit of a relief rally in financial markets, quickly followed by a pile of poop and then, bye-bye economy.

The International Swaps and Derivatives Association (ISDA) just announced the results of its semi-annual survey; at the end of 2008 CDS notional amounts outstanding have dropped significantly to "just" $38.6 trillion. 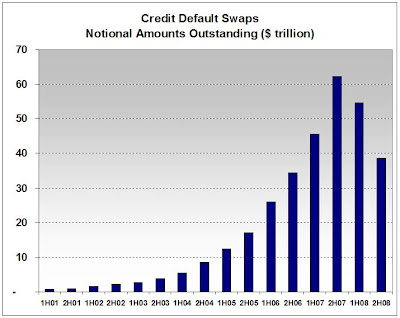