Just about everyone thinks that all money is the same, that a dollar is a dollar. But that's just not so: like the pigs in Orwell's Animal Farm some money is "more equal" than others, i.e. it has more power and significance in the real economy outside finance. But, unlike in the story, today's money pigs are actually the weakest amongst money animals.

That's a particularly important distinction to understand today, when bailout "money" is going around in the tens of trillions causing much consternation and/or glee to hyper-inflationists and goldbugs. Even worse, it is causing many of us to scream "social injustice" at the top of our lungs, but for the wrong reason.
Why?
Because for the most part bailout money consists of book-entries to replace other book entries that have been deleted in the deflationary credit destruction of the current crisis. Let's call such funny money Pigs (after the pink color of $5 bills in Monopoly, you understand..). And, as we well know, porcines don't fly. 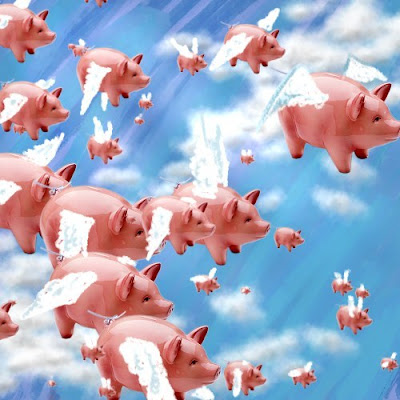 Pigs, in fact, don't fly
Such bailout Pig money stays mostly put on banksties (i.e. balance sheets) and like its bacon buddies it doesn't go for much activity. It doesn't produce any wages and salaries, spending or investment in productive assets because, unlike "real" money, it doesn't get loaned out. It's there today to plug holes left by yesterday's loans gone sour, not to make new ones. One could say that Pigs are there to be seen and heard (oink, oink), not to do anything useful.

Why am I saying all this? Because I hear a lot of activists complaining that this kind of piggish money should instead go towards social programs and/or the real economy. That's almost delusionary, I'm afraid.. Does anyone think that $13 trillion dollars (latest bailout count) could be absorbed by the real economy so fast? Or that so much RealMoney(tm) could in fact be created, if anyone was crazy enough to get it circulating in the first place? No way.

We should simply forget that this kind of money is... money. Let's just imagine it as pigs around the trough.

Hmm.. I wonder what should we call the real stuff? Greenbacks? Thalers? Denarii?

A NOTE ON READER COMMENTS

In recent weeks this blog has come under increased attention from various advertisers who use the Comments section to pollute the otherwise pristine thought environment of readers' comments, i.e. we're getting lots and lots of comment spam :(. I have thus started using comment verification (the gobbledy-gook you type to enter a comment) and comment moderation (for comments entered on posts older than a certain number of days).

If your comment is held up for a day or two while I notice and approve it, I'm sorry but we live in a digital age... Hopefully the pests will give up pretty soon. They are already down to just a few a day.
Posted by Hellasious at Monday, April 13, 2009