After bouncing from absurdly-low levels that discounted a new Great Depression, markets have now gone giddy and are blithely discounting a sharp, V-shaped recovery in the economy.
It's not going to happen. The reason can be easily deduced from the chart below (click to enlarge). It shows annual growth rates in nominal GDP and household debt. Notice the tight correlation that existed until 1998, when a substantial and prolonged divergence began and persisted for a whole decade. 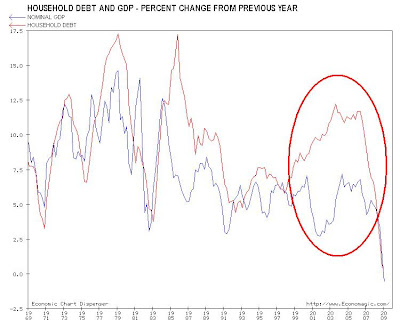 GDP Was On Household Debt Steroids During 1998-2008
This was a direct result of the low interest rate policies instituted by the Fed in the aftermath of the dotcom bubble and the 9/11 attacks. The purpose, clearly articulated by then Chairman Greenspan, was to artificially "goose" the domestic real estate sector in the US.

The result, benign at first, was that the economy got hooked on debt steroids. GDP growth bounced back starting in 2002, but it took ever more debt to eke out further modest gains. The ultimate cost was bulging household debt, particularly in lowest-quality mortgages and consumer loans, which could not be supported by workers' earned incomes. Household debt as a percentage of disposable personal income jumped from 90% at the end of 1998 to 132% at the end of 2007 - the fastest rise ever.

Consumption makes up 70% of the US economy. Given that American households are in no great hurry to resume borrowing and that banks are, likewise, in no condition to resume lending to incremental borrowers, growth will be dependent on the other, non-consumption 30%. How fast can government spending and corporate investment grow, to outstrip the weakness of the household sector? Not that fast...

Surely, we can't bet on them growing so fast as to generate a sustainable V-recovery. After a period of inventory-to-sales adjustments that will last a few months (happening already, I believe), we will enter The Great Reset period. And this will go on for years, even decades.

The conclusion is that corporate profits in the financial and consumer sectors are going to be weak for a long time to come. Markets, too, are going to eventually figure this out...
Posted by Hellasious at Thursday, May 21, 2009