How Steep Is My Valley

The steepness of the US Treasury bond yield curve is once again reaching 30+ year record levels; the difference between 10- and 2-year yields is currently at 222 basis points, having previously nearly matched the record 270 bp of 2003 and 1992 (see chart below, click to enlarge). 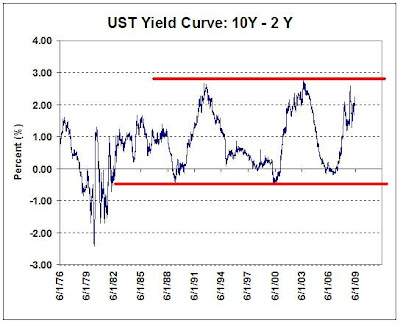 Data: FRB St. Louis
Many analysts interpret this as a clear sign of imminent economic recovery, and so do stock market bulls. I was just speaking to an investment bank trader and he confirmed that they are using the 10y-2y spread as a market signal, both in the US and in Europe. So far, so good, it seems.
But... today's proper interpretation of yield curve spreads should be differentiated from previous years. With short-term interest rates hugging the absolute zero mark (3m T-bills are at 0.14% and 2-year notes at 0.94%), long-short spreads of 2-3% are nearly meaningless because they are mostly predicated by a basic concept of monetary theory, i.e. the term structure of interest rates.

What I mean is that in interpreting the yield curve's current shape and steepness we should also take into account the absolute level of interest rates. We are simply too close to the limit, the boundary condition imposed by the impossibility of negative nominal interest rates (we did very briefly experience negative rates for 1m T-bills at the height of the crisis). In other words, it's one thing to have a 10y-2y spread of 300 bp as a result of 7% minus 4%, but a wholly different matter when it comes from 4% minus 1%.

Furthermore, we should consider another factor: increased credit quality concerns for US Treasury bonds. A year ago the credit quality of the US was unquestioned. Today, credit default swaps (CDS) for 10-year treasuries are around 40 bp (went as high as 100 bp), meaning there is measurable and meaningful default risk. This results in yield premiums versus previous years, specifically for longer-term bonds.

CDS for 10-year US Treasury Bonds
A very obvious observation is that as credit quality deteriorates lenders may still be willing to lend short-term, but become more cautious on longer term loans. This causes the yield curve to steepen (higher 10y-2y spreads) perhaps for the exact opposite reason than bulls may suppose, i.e. a weaker economy and massive bailouts make longer-term treasuries less secure and thus long rates go up. This is not something that the US market has had to deal with in the past because its credit quality was always presumed to be AAA+.

Thus, the 10y-2y spread being at near record highs should be more closely examined, and perhaps differently interpreted, than before.
Posted by Hellasious at Tuesday, May 05, 2009