Long-term interest rates are jumping, with yields on 10-year treasuries now up to 3.73%. Apart from the significant impact on the real economy (e.g. higher mortgage rates ), this development is also placing into doubt the validity of a long-standing leading indicator, i.e. the yield spread between 10-year and 2-year treasury bonds (see chart below, click to enlarge). 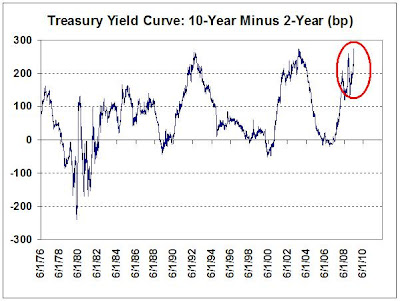 Economists and market analysts commonly use this spread as a predictor of future economic activity and, thus, the direction of corporate profits; and from there, the prospects for the stock market. Indeed, it is one of the components of the official Leading Economic Index calculated by the Conference Board.

Right now the spread stands at 273 basis points (2.73%), the widest ever. Many analysts, therefore, are predicting the economy will turn around in short order and start growing smartly once more (the V- Gang). Ditto for corporate profits and, predictably enough, for share prices. which have been discounting exactly such a possibility for the last three months. To judge from the shop-talk in the various dealing rooms I contact on a regular basis, the 10-2 spread is the single most fashionable indicator right now.

I think this to be a grave mistake. I believe that, unlike other instances, the spread is widening because of two developments unprecedented in the history of the US (though common enough in other, less developed countries, in the past).
Clearly, therefore, the widening of the spread is not due to fundamental economic strength. Instead, it is indicative of the rising risk premium that investors are demanding for lending the US government money for longer period of time.
For a better appreciation of this fact, look at he chart below: it's the 10-2 spread divided by the yield of the 2-year treasury, i.e. the spread as a percentage of the 2-year yield (today, 273 bp/97 bp = 2.81= 281 bp). 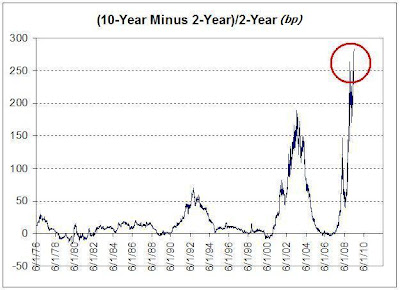 The premium demanded for lending long is at a very significant new record high, when measured relative to short-term rates. In my opinion, then, to interpret the 10-2 spread as a harbinger of an imminent V-shaped recovery is tantamount to "spreading lies"..

Durable goods orders were announced today, up "more than expected" at +1.9% for the month. Here's the crucial detail: defence goods were up a whopping +23.2%. Without them the increase would have been +0.6%. Now.. do you suspect that some DOD orders were placed ahh.. shall we say.. opportunely? Nah...
Posted by Hellasious at Thursday, May 28, 2009