Are You SURE You Want A Mortgage?

Back on the interest rate spread and ratio front, this time on a pair of rates that involve retail banking customers, i.e. you and me: 30-year conventional mortgages (the banks' lending rate) and 1-month CDs (the banks' cost of borrowing funds). We can view this as indicative of gross profitability (gross interest margin) in retail mortgage banking, even though a growing proportion of mortgages are now ARMs (adjustable rate).
As the chart below shows, the spread is back near its all time high, but nothing truly out of the ordinary is happening. Banks are simply making a decent profit on these loans - though they are not making a lot of loans, of course.. 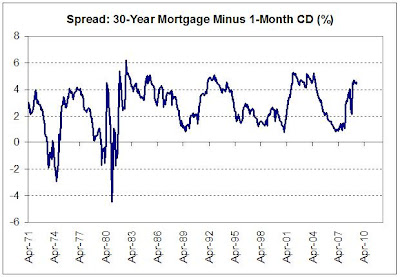 Data: FRB St.Louis
But what about the ratio of the two rates? I know many think a spread, is a spread, is a spread - but I hold otherwise. Near boundary conditions (zero nominal rates) ratios matter, too. And here things look extremely extraordinary: conventional mortgages are going for an eye-popping 16 times more than the cost of funds (see chart below). Now that's what I call a profit! 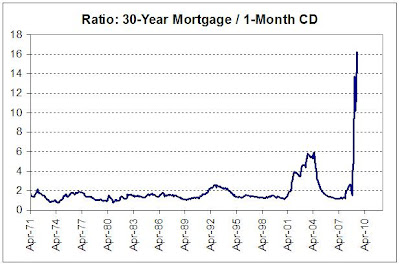 So what, you may ask? Why is this zooming ratio important? Because, if things stay as they are for an extended period of time, new borrowers - wage earners like Mr. and Mrs. Average Joe - have no hope whatsoever of servicing these loans, eventually. Their cost of borrowing is sixteen times greater than the raises they are likely to get at their job - assuming they get a raise or even hold on to their jobs.

Don't forget that the extra money to pay interest has to come from somewhere and for most people it comes from getting a raise at their job. Putting it another way, the incremental cost of borrowing money is sixteen times greater than the incremental benefit of being employed. Are you SURE you want to get a loan right now?

Of course, there is a reason why all this is happening: the expectation of deflation is holding short rates (and pay raises) way down, while the desire to recoup massive losses and control risk is keeping bank lending rates high.

Hmm.. maybe we should move back to imposing strict regulations on retail interest rates? Say... 2-3x cost of funds for mortgages and a bit higher for consumer loans? Just an idea... 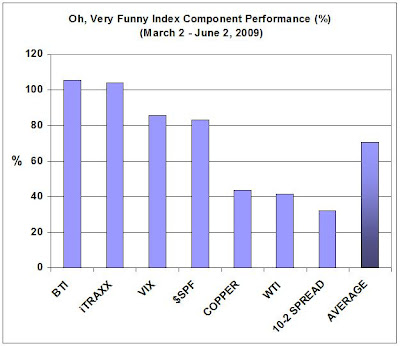