I just read a very good article in Bloomberg about Bernanke's conundrum, i.e. rising long-term rates even as short rates are kept near zero. I particularly liked this comment by Mark MacQueen of Sage Advisory Services: “You can’t have it both ways. You can’t say I’m going to stimulate my way out of this problem with trillions of dollars in borrowing and keep rates low by buying through the other. I don’t think that is perceived by anyone as sound policy.”

Yield On 10-Year Treasurys (Chart: Bloomberg)
Very simple and very common sense, indeed. But since the Fed and Treasury can't have it both ways, what's the way out?
I understand (but do not applaud) the current monetary bailout reaction, based as it is on America's deeply ingrained Great Depression phobia. Countless economists and Wall Streeters have spent their professional lifetimes studying and war-gaming the 1930's - Mr. Bernanke most of all. Nevertheless, they are completely and totally, knee-jerk wrong; throwing out more money (i.e. debt) will not resolve a problem that was created by too much debt, in the first place. As this blog's masthead proclaimed a while ago: "We hold this truth to be self-evident: You cannot solve a debt problem by issuing more debt". 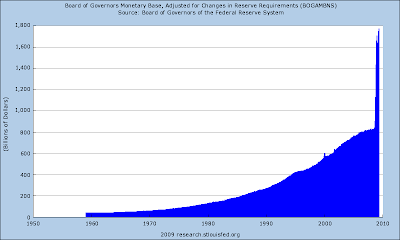 Board of Governors Monetary Base (Chart: FRB St. Louis)
Like other shortsighted generals in history, our monetary generals are fighting the previous war - furiously building static Maginot lines whilst Guderian is warming up his highly mobile panzers.
Therefore, I strongly recommend that instead of engineering a massive explosion of money supply through quantitative easing, the US should regulate it very tightly. I have proposed The Greenback, i.e. benchmarking money supply on the growth of renewable energy. This scheme will most likely lead to significantly higher short-term rates, at least initially. But, is this so bad? I think not.

For one, higher short rates will promote domestic savings, sorely needed in a period of massive budget deficits and the urgent requirement to invest huge sums in sustainable energy*. For another, such a policy will immediately restore confidence in the dollar and our commitment to service our debt. It is likely, thus, that long rates will drop.

Let's recap: our current expansionary monetary policy is completely at odds with present and future requirements in the real economy, which is challenged by a combination of too much debt, fewer and lower-paying jobs, resource depletion and environmental destruction.

The bond market, those ever-present bond vigilantes, is already warning us that we have got to bring monetary policy in line with reality soon, as opposed to sleep-walking in a rosy dream state.