The Rise And Fall of Finance

In 1979 I had the great good fortune to see the Metropolitan Opera production of "The Rise and Fall of The City of Mahagonny", the political opera by Kurt Weill and Bertolt Brecht that was written back in 1930 - at another time of severe financial trouble around the world.

Since the work is a nightmarish vision of capitalist greed and the power of money, the Met's performance was essentially its premiere in the US, with Teresa Stratas giving a memorable performance as Jenny the opportunistic harlot. Wall Streeters loved it (it takes one to know one, eh?). 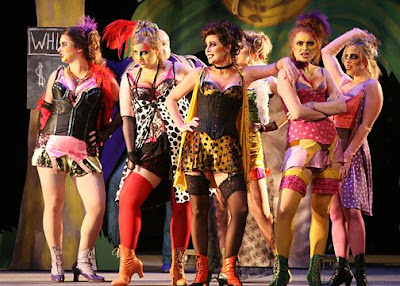 Mahagonny's Primary Industry At Work
The final scene depicting the city's destruction by fire has stayed with me ever since. And the opera's title has come in handy several times, particularly when referring to the cyclical and repetitive nature of greed in human history.

Thus, today's title and chart below (click to enlarge). It shows debt of the financial sector as a percentage of all debt outstanding in the U.S. (currently $17 trillion out of a total $53 trillion of debt). 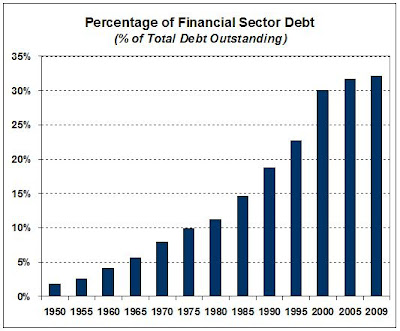 The Rise of Finance, also known in this blog as The Tail That Wags The Dog, can thus be clearly observed in the spectacular rise of financial sector debt as a percentage of total debt. From an inconsequential 1.9% in 1950, it rose inexorably in following years to reach an astonishing 32% today. The importance of finance to our economy and society has risen commensurately - to the great detriment of both, as has now become obvious.

Why and how did we allow a business sector which relies almost entirely on greed and animal spirits to become so powerful within our national ethos? How are we going to stop and quickly reverse this patently destructive process?

Could it be that The Crisis could be a cleansing deluge, wiping away the wretched excesses of finance-as-painted-harlot and restoring her to the back alleys, where she so clearly belongs?

Yes, it could. But not before we stop viewing finance as an industry worthy of being bailed out at every turn of the road and belonging at every street corner, besides. Enough is enough, already..
Posted by Hellasious at Tuesday, June 30, 2009