Where Are Profits Going?

This blog's position has always been that the US economy's performance post-2000 has been due to ever-increasing assumption of debt, particularly by households to finance real estate purchases and personal consumption. I don't think anyone can dispute this any more: just look at the chart below (click to enlarge). 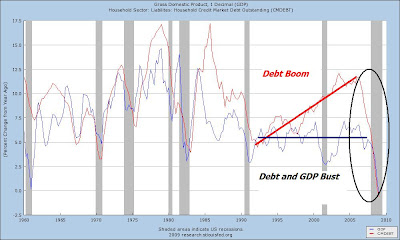 The Debt Boom Finally Begat The Bust
Charts: FRB St. Louis
Debt kept accelerating while GDP remained "stuck" at around 5% annually (these are nominal figures). In the end, the debt boom created its own bust and dragged down the entire economy. Cement shoes come to mind...

So, now what? What does the future hold? In particular, I am referring to corporate profits, the fundamental driver of stock market performance. We can analyse markets using a multitude of perspectives from astrological to psychological but, when it's all said and done, what matters is profits.

Since 1997, or so, households assumed ever more debt in order to consume and, thus, increase corporate profits. At the top in 2006 it took an additional $1.3 trillion in household debt to generate an additional $300 billion in profits, i.e. a ratio of 4.3 times (see chart below). The debt intensity of corporate profitability was huge, but it weren't corporations themselves that were going into debt; it was their customers. 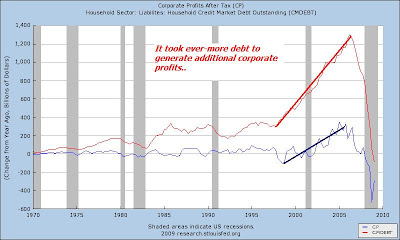 Annual Increases In Household Debt and Corporate Profits ($ Billion)
We are now deep in a debt-bust crisis and it is the first time since at least 1953 that household debt is decreasing in absolute numbers, year on year. What does this mean for corporate profits? Based on the relationship above, I expect they have quite a bit more to drop, perhaps after a (very) brief period of stabilization due to cost cutting (see chart below). 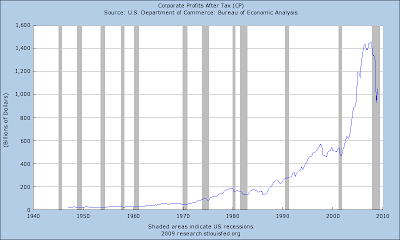 I would thus not be at all surprised to see after-tax profits go back to around $300 billion/year, where they were in 1992 at the beginning of the debt acceleration cycle. What does this mean for stocks? Look at the chart of S&P 500 below (click to enlarge). 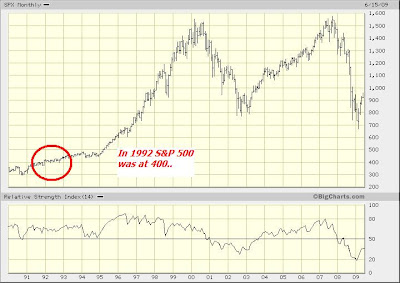 In 1992 S&P 500 was around 400, or 57% lower than current levels. Of course, this is a pretty simplistic and one-faceted approach to corporate profits and the market, dealing as it does only with debt. (But then again... KISS has always been pretty good guidance.)

There is another macro approach to corporate profits, however. As a share of GDP pre-tax profits had reached a record 13% in 2006: corporate greed had reached a peak, indeed. 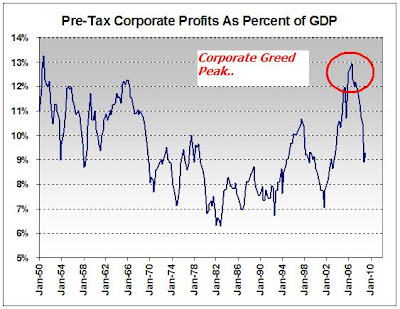 If the ratio of profits declines to a new low, say 5%, and nominal GDP declines another 10% to $12.6 trillion (not at all impossible in this crisis, it was there at the end of 2005), then we are looking at pre-tax corporate profits of around $630 billion.

Now, include a boost in tax rates from the Obama administration and the $300 billion after-tax number mentioned above does not look so outlandish, all of a sudden.
Posted by Hellasious at Tuesday, June 16, 2009