Everyone agrees we are going through a Great Recession brought about by excessive debt; or, to be more precise, the deflation of excessive debt. The proximate cause of the crisis is, therefore, similar to that of the Great Depression during which Yale economist Irving Fisher wrote The Debt Deflation Theory Of Great Depressions (1933).

Mr. Fisher became justly infamous for his supremely ill-timed prediction of permanently high share prices just days before the Crash of 1929. What is less well known about him is that he lost his fortune in the Depression; not because he speculated heavily before the Crash, but because he kept buying all the way down afterwards and eventually had to be bailed out by his wealthy in-laws.

Well, as the saying goes, a recession is when your neighbour loses his money and a depression is when you lose your own, so it doesn't surprise me that Mr. Fisher finally "got religion" about debt's corrosive powers in 1933, four full years after the Crash.

Despite his claim of breaking new ground with his above study, the conclusion that over-indebtedness leads to liquidation, distress selling, a fall in the level of prices, unemployment and economic malaise was, in fact, very very old hat. Think of the Sumerians (5000 BC) and organized agriculture, spot and forward grain markets, loans of silver, the Code of Hammurabi fixing interest rates to avoid usury, etc. 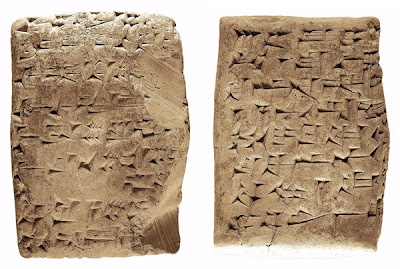 Mesopotamian Contract For A Three-Month Loan Of Silver (1800 BC)

In any case, Mr. Fisher eventually figured out the cause of the Great Depression. Bravo, but what does that have to do with today's troubles? Enter Mr. Bernanke..

The current Fed chairman - himself an academic theorist from Princeton - is a great fan of the late Yale don and his remedies for debt-deflation depressions. Here is a revealing paragraph from Mr. Fisher's 1933 opus:

"... It is always economically possible to stop or prevent such a depression simply by reflating the price level up to the average level at which outstanding debts were contracted by existing debtors and assumed by existing creditors, and then maintaining that level unchanged."

In other words, Mr. Fisher claimed that depressions could be prevented, or remedied once they were under way, "simply" with monetary policy. I strongly believe this to be utter nonsense.

The main reason is this: the production, distribution and consumption of real goods and services cannot be ultimately controlled by an artificially imposed mechanism such as money, which is, after all, a measurement and exchange convention. Claiming that money controls the real economy is like saying that how far we travel depends on how many miles we make available to measure distance with. Or, as a friend is fond of saying: "It's only money".

(In Mr. Fisher's defence, however, I must also note that he probably couldn't in 1933 imagine a currency regime so completely devoid of reality anchors; i.e. today's purely fiat money, which can be issued at will by the mere act of borrowing. Neither would he conceive of authorities so narrow-minded, so perniciously attached to free market dogma, that they would completely disavow their legally mandated regulatory and oversight responsibilities.)

My position is that the massive debt bubble created a similarly massive amount of malinvestment in surplus (and now useless) physical stock: housing, ships, office buildings, shopping centers, factories in China, call centers in India, vacation homes in Spain, and much more. Excess capacity is a common enough phenomenon of all run-of-the-mill recessions, being the result of fallible human beings optimistically extrapolating demand too far out of reality's reach. Usually, it is soon absorbed after a few quarters of creative destruction and increased demand from a rising population.

But this time it's different - very different - precisely because the huge global credit bubble blew this extrapolation, this excess capacity creation, way out of all previous experience. For example:
No, this is not my daddy's recession, not even my grand-dad's, and I claim as obvious that this type of excess cannot be remedied by monetary policy alone, as Messrs. Bernanke and Geithner (and Mr. Paulson before him), plus an army of financier-speculators now believe. They are acting much like voodoo medicine-men, applying ancient patent snake oil on a malady that instead requires a radically different and up-to-date treatment.

What needs to be done? I have laid out my proposals several times, so I will only provide the headlines here:
Have a nice weekend.
Posted by Hellasious at Friday, October 23, 2009