The Wall Street Journal reports that a secretive dinner meeting of top hedge fund managers took place recently, at which the subject was the euro going to parity against the US dollar. The gathering is dubbed the euro-dinner and the "short euro - long dollar" trade is characterized as a "career trade".
Yup... such is the level of financial reporting in the Murdoch Era. 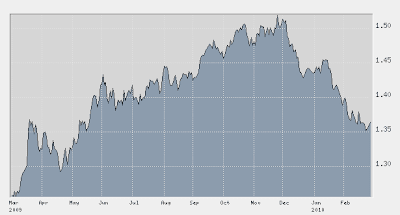 EUR/USD
Let's pause to reflect on these "news":
So.... what better than a bit of hush-hush, nudge-nudge, wink-wink to push the credulous hoi polloi public into assuming the positions of said hedge fund managers, allowing them to turn open positions into ready cash gains. Trust me, it's not at all easy to get out of big short positions in small, illiquid markets. There is simply too much risk of a short squeeze. Remember the old adage: He who sells what isn't his'n, buys it back or goes to pris'n.

The Journal also mentions the euro-dinner took place at a townhouse and the menu featured lemon chicken and fillet mignon. Of course.. would you believe them if they said Bob's Greasy Spoon and Beefaroni?

Well, I say Gullibility Pie is on offer right now and it's being served on a silver platter, with all the trimmings. And it's free!

P.S. I don't really need cred, at least not for readers of long standing, but I should point out that I was talking about the dollar's undervaluation last November, when it went to 1.50. See this post: 2012 - Dollar At The End Of The World.
Posted by Hellasious at Monday, March 01, 2010