CDS Regulation At The OK Corral

I have been beating the drum on CDS for a very long time (well, "very long" in terms of the market's attention span, which has more in common with fruit-flies than normal human beings; scroll down to the January 16, 2007 post in the Sudden Debt link provided above). Thus, I am partly bemused and partly satisfied by the current drive to put some order - at long last - in the Far West saloon that is the credit derivatives market.
Because of what has happened to European PIIGS, and the vested interests of US-based investment banks and hedge funds, said drive has originated and gathered steam in Europe, as this NY Times article points out. The Europeans want outright bans, taxation and heavy regulation, while the Americans want the CDS market to move to an exchange/central clearer in order to impose transparency, capital adequacy and position/trading limit rules.
In a nuthshell, the Europeans want to kill the cow while the Americans want it moved to a supervised dairy barn where it can be milked in more sanitary conditions, open to periodic inspection by health officials.
No matter which option you prefer, however, the market has already self-corrected a large part of the excess it created during 2006-08, as the chart below demonstrates. Therefore, calls to corral the CDS market is a bit like closing the barn doors after the cows have gone (see chart below). 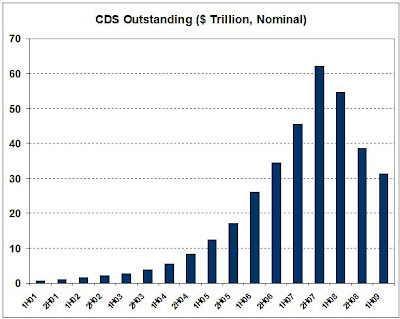 CDS Outstanding                                                 Data: ISDA
That is not to say that regulation is not necessary.  It is, and very soon - immediately, even.
So, I have a question relating to sovereign-risk CDS (i.e. insurance written on government bonds).  Can a hedge fund - or anyone other than, perhaps, a supranational institution - write insurance on a country??
Let's all be serious for a moment, eh?  Because my memory exceeds that of a fruit-fly and I distinctly remember investment banks begging - yes, begging - to be bailed out by national treasuries, just a few quarters ago.
Posted by Hellasious at Wednesday, March 10, 2010