One of The Dollar's Multiverses: Insufferable Indifference

Love it or hate it, the U.S. dollar is still the world's premier reserve currency. The primary reason is that the United States (5% of the world's population) accounts for 20% of global GDP.  Or, you could turn the argument around and say that, being the issuer of the global reserve currency,  the U.S. can consume much more than it could otherwise.
Whichever came first, the chicken (a huge U.S. GDP) or the egg (the dollar's global  reserve status), we know for certain that a fundamental undrpinning for the "egg" is the fact that crude oil is priced in dollars.  Simple math: the world consumes some 85 million barrels of oil per day.  At current prices that's around 2.5 trillion dollars per year, or ~4% of global GDP.  Add natural gas, LPG, the value added to petroleum and gas products by refining, shipping and marketing and the entire complex easily reaches 10% of GDP.  Hydrocarbons are by far the world's single biggest business.  And that's before finance is added into the pot: trading of energy-related derivatives alone amounts to multiple trillions annually in nominal activity, doubtlessly producing significant amounts of  "real" dollars that are ultimately counted as GDP.
Then, consider the capital sunk into this business: oil and gas wells, drilling rigs and platforms, pipelines, tankers, refineries, storage tanks, service stations, the oil-fueled transportation infrastructure... I don't know if there is a comprehensive global estimate, but I bet that when it is all added up it comes second to only real estate in terms of invested capital.
Global financial supremacy is not a monolith, but a composite.  It is a mosaic of energy and currency cross-relationships that are now supposed to be threatened by the emergence of  the euro as a possible alternative to the established dollar hegemony.  But can the replacement, alone, of one fiat currency for another be the undoing of an Empire?  Of course not - after all they are just book entries.  Just as debt and money cannot create an Empire by themselves, they cannot bring it down, either.  For that to happen a paradigm shift is necessary.  Or, in more classical terms, Rome was not built in one day and didn't come crashing down in one, either. 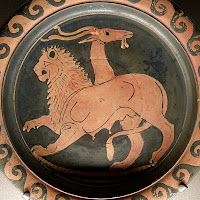 So, what is the paradigm shift that could bring the dollar hegemony down?  No, it's not the economic parallax error  that goes by the name of China.  As the term parallax implies, that's just a shift of reference points not substance. The Chinese have even adopted the dollar for their currency in all but name, since the yuan is firmly pegged against the dollar.

The Mythical Chimera
A shift in the energy paradigm, however, will certainly be monumental and could spell the end of the dollar as global reserve currency.  As the world moves away from a highly centralized fossil fuel regime and adopts more distributed solar, wind, geothermal and other renewable sources, then it becomes much more likely that the dollar will lose its global fiat power. It is not Mrs. Merkel's histrionics about the euro that matter, but what goes on in Siemens, Vestas, Gamesa and Desertec.
The threat to the dollar, then, does not lie in the euro, per se, but in its marginalization via the adoption of much more modern, powerful and appropriate energy technologies.  In one quantum multiverse, one that could indeed be our own future,  no one cares about the dollar which is relegated to being the internal exchange medium for a has-been empire.  It will suffer from plain old indifference, just like no one gave a damn who was the emperor of Rome after the 3rd Century AD (does the name Avitus ring a bell? Majorian?).
Posted by Hellasious at Monday, March 22, 2010