Sideshow Of A Main Show's Sideshow


Pardon the mangled syntax of today's title, but  it serves as a hint  to my main point: the Greek "crisis" is just a sideshow - in fact, it's even less than a sideshow.  The whole thing reminds me of those nested babushka dolls from Russia, where one doll serves to obscure the existence of the other.

So, what's the main show? The China - U.S. war for global supremacy, currently being fought on the dollar/yuan battleground. China's cheap currency, administratively pegged at artificially low levels, allows the country to remain the world's ultra-low-cost manufacturing center.  A bottom-rate value for the yuan is completely at odds with China's newfound wealth and power and should, instead, be allowed to move significantly higher, perhaps as much as 50%.  America has finally woken up and is screaming bloody murder..
But America has a problem: its massive budget deficits need to to financed; for this fiscal year alone it comes to $1.6 trillion.  I estimate that at least $1 trillion of that must be provided by foreign investors, since the domestic saving rate is nowhere near what is necessary (it should be over 10% to cover the gap - see chart below). 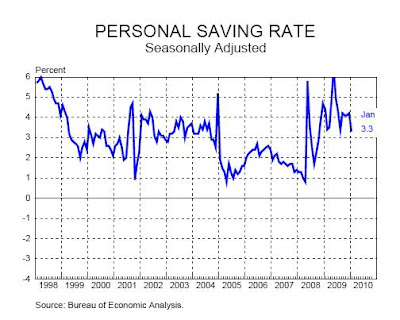 In the past the U.S. could issue debt almost at will, since it possessed the world's sole reserve currency.  From the inception of the euro, however, this is no longer the case.  The U.S. must  now convince the world  that it should prefer the dollar to price its goods (e.g. crude oil) and to save its excess capital.  It's a battle for hearts, minds and money - and these days this means mostly Chinese politburo hearts, minds and money.

What does this have to do with Greece and the euro? Greece is in the middle of a boxing match between the U.S. and Germany, the EU's heavyweight.  The U.S. financial establishment wants to make clear that the euro is not worthy of reserve currency status and the world should, instead, continue to buy Treasurys.  Germany wants the exact opposite, so it too is being obstinate about bailing out Greece, fearing that such an event would be interpreted as a sign of weakness and lack of monetary resolve.  It's terrible to be caught in the middle, when elephants are trampling about..


Some facts and figures to support my premise:
So what about those babushkas?  The first one we see is a Greek maiden in distress - but when we look inside we find a steely-eyed German frau.  And hidden inside that there is an American cowgirl with a couple of ivory-handled Colts strapped around her waist.  And finally, we find a Chinese lady modelled after the famous laundresses of yore.  She has a thin-lipped smile on her face and says: "No tickee, no shirtee". 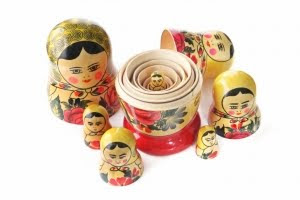