This blog was created in late 2006 in order to "vent" my frustration over the huge debt bubble and what I  perceived to be the risks it posed to the global economy.  In summary, I claimed that the economy had become hooked on debt to create additional GDP growth - or "growth" in quotation marks - and that the finance "tail" was wagging the real economy "dog".
Soon thereafter, the bubble burst - first in the U.S. and then everywhere else. What followed was the worst economic crisis since the Great Depression.  And we are still in the midst of it, albeit in ever-mutating form, so today's post is meant as a tour d'horizon, a quick summary of how I see things shaping up today.
I believe all that has happened so far is The Great Debt Bailout.  Governments and central banks have issued trillions in new government-backed debt, some to replace private debt gone bad (bailouts for billionaires) and some to finance massive budget deficits (pennies for penniless).  It is a policy mishmash produced by the combination of  (a) Bernankean revulsion to monetary deflation and (b) Keynesian aversion to economic recession.
This veritable flood of new and replacement public money averted the occurrence of an immediate, catastrophic Great Deflation, but at the cost of sharply higher sovereign risk.  Debt was not allowed to be destroyed through default or voluntary cancellation but, instead, was transferred onto the shoulders of the public at large. The gross amount of credit risk, therefore, has remained essentially the same as at the height of the credit bubble, ameliorated somewhat by the fact that government debt usually carries lower interest rates and can thus be serviced more easily. But relative to the shrinking economy, total debt has gone higher still.
Look at the chart below: Total credit market debt in the U.S. has hardly budged in the last two years after its previous rapid rise  (blue bars), but because the economy slumped debt to GDP kept rising (red line). 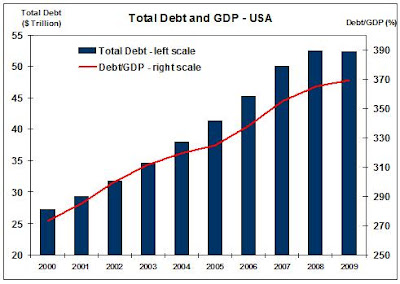 The same debt-fever condition is inflicting just about every western economy, from Japan to the U.K.

And this is why the Greek debt crisis is so important right now, despite the country's relatively  small economy (its GDP ranks it 27th in the world and amounts to just 3% of total EU output).  It is the first significant sovereign debt crisis, occurring as it does in a country that mostly adopted the free-markets, debt/asset /finance sector bubble model to boost its economy.  Yes, there are important details unique to Greece, such as a bloated public sector, graft and a rather inefficient economy, but the big picture is not unlike that of the U.S. or the U.K.  To wit, Greece is suffering from a South European variant of the Anglo Disease.


We are, therefore, about to witness the first significant sovereign bailout (see this, too) in what is shaping as the next domino to fall during this Great Recession.  What will come next I have no clue, but I should point out that many - if not all - western nations are in similar straits, i.e. their total debt is simply too large to be serviced properly by earned income.  And as the masthead of this blog says: "A sustainable economy is not possible with unsustainable debt".  Or, to put it another way, you can't cure a debt bubble by blowing more debt into it..
Posted by Hellasious at Saturday, April 10, 2010