Gorillas In The Drawing Room

One of these days the entire world is going to wake up and realize that its debt problems are one heck of a lot bigger and more serious than Greece, which is just the first Debtopia to unravel.  That it's not the debts of Portugal, Ireland, or even Spain that may cause the entire post-WWII financial system to come crashing down.
But that it is the United States, with a total debt load of $53 trillion (380% of GDP) and monstrous unfunded medical and pension liabilities (pick a BIG number, it's all quite fictional anyway), that is the huge gorilla in the drawing room that everyone is studiously trying to ignore.

Financial panics are not created in a vacuum;  they are born from a mixture of  high leverage, overvaluation and serious negative economic developments that simmer underneath, while complacency drives prices ever upward until there is nothing below to support them.  And when the inevitable aha! - ohoh! - oh shit! - what the f*ck?! -  moment arrives everyone wants to jump off the trapeze at the same time, only to discover that the safety net that is composed entirely of "faith" is gone.


One of these days people will panic, start selling into a hollow market  that has no bids at all, take out sell stops in one fell swoop and force the cavalry to come to the rescue, later claiming that the plunge was - perhaps - some sort of a technical glitch.
It looks to me, then, that yesterday was a dress rehearsal for a bona fide panic, even if it was exacerbated by the prevalence of automated electronic trading in non-traditional venues (i.e. outside of NYSE and NASDAQ) where liquidity suddenly disappeared (and why did liquidity suddenly disappear?).  Some will point fingers to such black-box trades in order to explain away the sudden plunge in prices, but my experience tells me it was otherwise.

(Here's a piece of information that may explain massively abrupt declines: thirty or forty years ago most shares were owned directly by individuals.  Today this figure has shrunk to around 20%, the rest controlled by professional money managers who, playing with Other Peoples' Money, mostly follow the same play-book.)

The real cause, in my opinion, is the same as a year or two ago: there's just too much debt in the system.  Governments and central banks took unto themselves the toxic and defaulted debt of the private  sector (mostly financial), but the entire debt is still there - albeit in different form.  It was, therefore, only a question of when and where its crushing weight would make itself felt once again.

Something totally unrelated, I just couldn't resist.  Or, maybe, it isn't unrelated?  The UK is about to have its first hung Parliament in 35 years.

The following picture is from yesterday's UK elections.  David Cameron, leader of the Tories (Conservatives) is at the podium, presumably giving a thank-you speech for being re-elected to his seat in Parliament.

Now, who's the guy behind him?  And... they call it the Conservative party?  OOOOkkkkkkk... 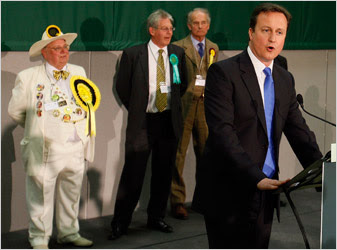