A dozen alumni from Euro U. Class of 2000, get together for a reunion picnic.  The class president, a very thoughtful and generous fellow named Robert, brings everyone a new pair of shoes as a gift: the latest Nike trainer, size 10.  Very nice of you, thanks very much... says everyone as boxes are opened and shoes tried on.
But... while Hans is very happy because he's exactly a size 10 and goes jogging all the time - picnics included - Michel is indifferent, since he's a size 10 OK, but spends his spare time at art galleries  instead, where running shoes are decidedly declasse.  Jorge is size 11 and prefers sand and sandals, Vittorio rarely walks anywhere but when he does he strolls in ultra-thin  leather-soled loafers, Lena is a size 4 stilleto club-hopper,  Anders has an extra 20 lbs. around his waist and loves fly-fishing in waders... and so on.
To make matters worse, Robert insists that they should now all put their new shoes on and go running together.
Yeah, riiight...mumble the classmates (Hans excepted).. it's true that a decade ago we all promised we would stay trim and fit no matter what, but c'mon dude, get a life already, huh? 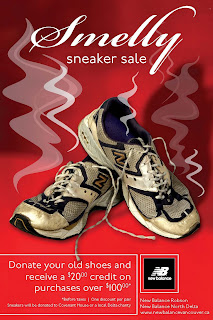 P.S.  I should point out that there's really nothing much new under the sun (Ecclesiastes 1:9-14, see below).  A monetary union was tried in Europe before: the Latin Monetary Union was established in 1865 and fell apart in WWI, though it was formally disbanded only in 1927. Its members? France, Belgium, Italy, Switzerland, Spain and...yes... Greece.


What has been will be again, what has been done will be done again; there is nothing new under the sun.  Is there anything of which one can say, "Look! This is something new"? It was here already, long ago; it was here before our time.
Posted by Hellasious at Sunday, May 16, 2010