The War Against Finance

Whilst everyone is understandably worried about Europe'an PIIGS debt, it's also timely to examine what is happening with America's federal government debt, the grand-daddy of them all.
In a word, it's horrible.  The debt-to-revenue ratio for the federal government is the highest since right after WWII, soaring to 396% in 2009 and  projected to rise further to 424% this year (see chart below). 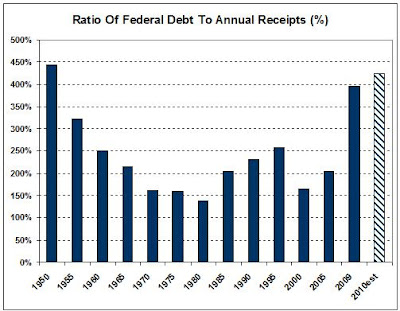 Data: FRB, US Dept. of Treasury
What is most worrisome is how fast debt rose, literally exploding from 2005 when it stood at $4.7 trillion and 205% of revenue, to nearly $10 trillion in 2010.  Such debt dynamics beg for explanations.
Apart from "keynesian" deficit spending, the most glaring dynamic at play is converting debt of the failed financial sector into public debt, i.e. massive bailouts.  In 2009 alone, financial sector debt dropped by $1.75 trillion while federal debt increased by $1.44 trillion (see chart below). 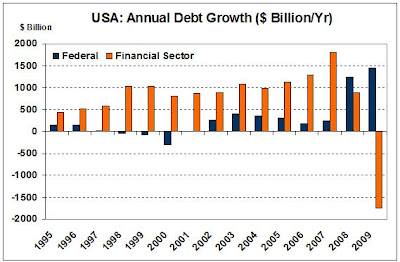 Data: FRB
Drawing an analogy with WWII, we the people of the United States went to war against Finance, lost and are now obliged to go deeply into debt in order to pay reparations.

There are a number of logical, if problematic, extensions that can be drawn from this analogy:
Posted by Hellasious at Saturday, May 29, 2010