Dedicated to the memory of Dr. Thai McGreivy
_____________________________
Fractals are everywhere in nature:   a bush by the side of the road, the pattern of electrical discharge in lightning, a piece of broccoli, the shell of a nautilus, frost crystals.. In short, the apparent complexity of natural shapes can frequently and elegantly be described by simple mathematical iterative functions.  For example, the Mandelbrot set is generated by the iteration of the complex polynomial  zn+1 = zn2 + c. Its plot on the complex plane leads to shapes of breath-taking beauty.

Fractals exhibit self-sameness, i.e. no matter how small or large the "piece" that one observes it always looks the same - or very similar - to the whole.  For example, a florette of broccoli  is essentially a smaller-scale  replica of the entire head.  This is very obvious in a particular variety of broccoli, pictured below. 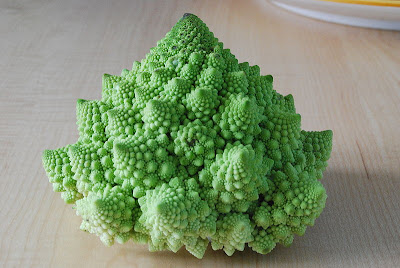 The study of iterative and recursive mathematics goes back centuries.  But widespread study of fractals really took off when personal computers made massive iterative computation and plotting available to everyone. For example, you too can download your very own fractal software here (chaospro).

My first exposure to fractals (though I didn't know them by that name back then) came in graduate  engineering school, when a professor started talking about chaos functions and how they could possibly be used to model and ultimately predict share prices.  I didn't pay attention;  the world was in the the final stages of the oil crisis (Iran hostage era), oil prices were zooming and I was a committed Joe Engineer who cared much more about modeling weight-distribution equations for the products of synthetic fuel reactions.

Oh yes, we engineers would have saved the world, don't ya know, and salvation didn't involve stocks, bonds or mutual funds.  Financial markets were moribund, anyway.

Of course, the bull started its historic run right then, in August 1982, with impeccably contrarian timing.  They say "no one rings a bell at the beginning and the end of bull markets", but that's wrong.  Look at the chart below: markets do ring bells, but most people are too busy listening to the ambient noise, instead. 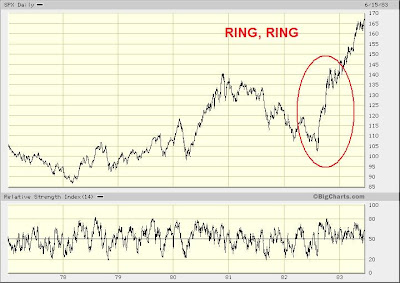 August 1982: The Bell Tolls For S&P 500
It was around the same time that IBM came out with the PC and Benoit Mandelbrot's work was first noticed by the financial community (he worked at IBM for 32 years starting in 1958).  It was the era of the random walk hypothesis and his fractal formulas were a slap on the face of mathematical economists (not that many took notice).  He claimed that markets weren't random but fractal, i.e. exhibited a complex behavior that could be broken into smaller and smaller self-same bits.  The idea was that  price fluctuations could be described by fractal functions, i.e. they were not random and were, thus, predictable - maybe.  He eventually wrote a book on the subject, The (Mis)behavior of Markets

To the army of academic economists who had religiously staked entire careers (and Nobel  prizes) around the exact opposite notion this was heresy on a grand scale.  The application of fractals to finance looked suspiciously like the hocus pocus of financial astrology, a kind of mathematical alchemy that sought to transmute simple formulas into traders' gold.

On Wall Street itself, marketing and trading departments didn't pay much attention, since they were busy selling "scientific" portfolio management based on the academics' random walk theories.  Their apple cart was hitched to a different, and differently profitable, horse and they saw no need to upset it.

Furthermore, most financial firms did not yet possess the massive computing capacity necessary for fractal calculations.  They were still in the initial stages of stitching together communications and data networks for their day-to-day operations and didn't have the time or resources for fractal mumbo-jumbo.  The age of information had dawned, but it was still early days.

But, things change.  By the late 1980's computers were increasingly used for crude black-box trading (crude by comparison to current practice).  It involved mostly arbitrage between share prices, index futures and options and it is considered the culprit of the October 1987 meltdown. The market was horribly overextended and due for a correction, anyway, but the speed and depth of the plunge took everyone by surprise, myself included.

Left unattended, computer programs kept issuing sell orders for baskets of shares to "profit" from  price discrepancies with index futures. Algorithms saw shares as mere numbers, mathematical data points with no physical correlation to a company's products, plant and equipment, technological know-how, profits, jobs or any other fundamentals.  That's what you get when you mix simple math with the base emotions of fear and greed - and by the time human beings came to their senses the Dow was down 22% in a single day, now dubbed Black Monday. 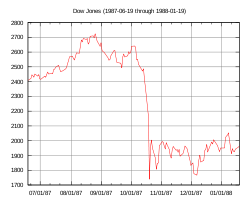 The Market Burps on Black Monday, October 1987
In Part II, coming shortly, I shall examine what happened next and how we are now in the completely uncharted seas of Fractal Finance with robotic, high speed trading.
Posted by Hellasious at Thursday, June 17, 2010